When I was fortunate enough to tour the Steigerwald Reconnection Project in August, the place was buzzing with construction equipment. In highly choreographed fashion, dozens and dozens of backhoes, dozers, and dump trucks moved soil around the beloved National Wildlife Refuge. Day after day, truckload after truckload, our partners at the Lower Columbia Estuary Partnership had worked with skilled construction crews to resculpt Steigerwald into something I could barely recognize.

Returning to Steigerwald in October, the earth work was nearly complete and most of the equipment was gone. After nearly two years, their role was wrapping up and the new form of Steigerwald had taken shape. It brought home not only the scale of this restoration project, but also the scale of this construction project. To stop and consider the thousands of truckloads of earth that had been scooped up and moved around the site was dizzying.

It brought to mind a study I’d first heard of several years ago. In 2004, a researcher from the University of Michigan did the calculations and concluded that humans move significantly more earth than all other natural processes combined. It is both astounding and sobering. The activities of people move more soil and rock than all of the world’s rivers, glaciers, volcanoes and winds. According to this research, common human activities ranging from construction to mining to agriculture outpace natural forces every year by more than 15:1. This researcher’s conclusions brought a new perspective to the force of nature and our extraordinary efforts to shape it to our liking. 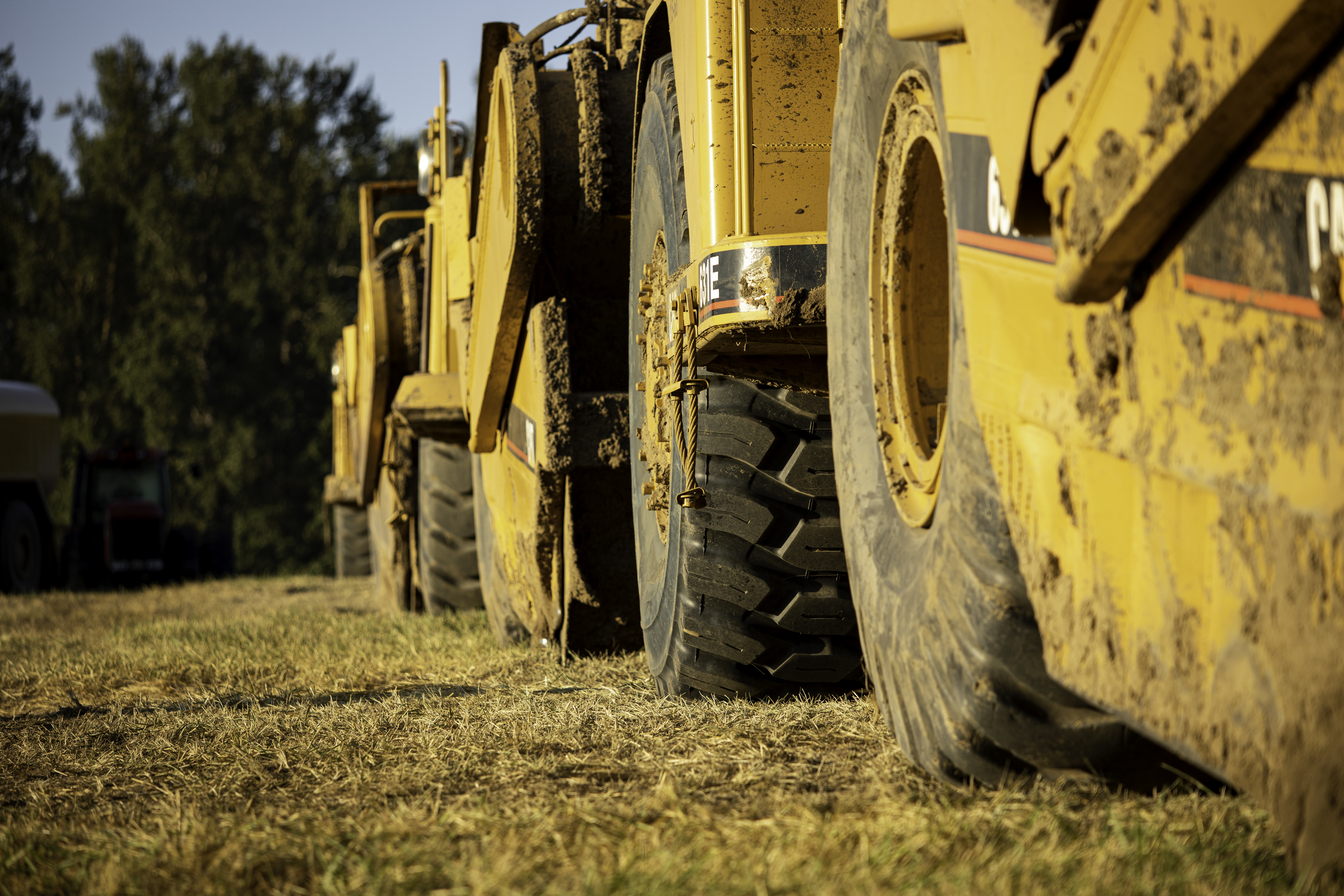 Geologically speaking, rivers, glaciers, and volcanoes shaped the Columbia Gorge. Over tens of thousands of years, the Columbia River and its tributaries churned mountains into soil. The river sculpted the landscape, and water was its primary tool. On the other hand, people only began their efforts to sculpt the Gorge over the last couple centuries. We blasted through mountains to create our roadways. We cleared and shaped the land to develop cities and farms. And—very importantly—we built massive dams and levees to control the river. Dynamite and concrete were some of our primary tools.

Along the stretch of the Columbia River that flows past what we now know as Steigerwald Lake National Wildlife Refuge, the U.S. Army Corps of Engineers piled extraordinary amounts of soil and rocks along the banks in the middle of the last century. This levee—stretching more than five miles—was intended to reduce flood risk by keeping the river inside its delineated channel. Soil was transported in by trucks and barges, an effort that was replicated again and again up and down the Columbia. These levees did their job well, disconnecting the Columbia River from more than 900 acres of floodplain habitat that supported migrating birds, salmon, and other wildlife.

As it turned out, those earthen levees were also very effective at keeping water in. There was no longer an outlet for Gibbons Creek to reach the Columbia, backing up water and resulting in persistent flooding problems for neighbors and the adjacent state highway. In moving all that earth, we’d exchanged one set of risks for another. Establishment of the National Wildlife Refuge in 1976 provided an opportunity to reconsider Steigerwald and its interaction with the river.

At its core, restoring Steigerwald was about restoring Gibbons Creek and its historic connection to the Columbia River. That would require moving a lot of earth—deliberately undoing some of that extraordinary effort of the last century. So, people got to work.

Standing on the banks of the newly reconfigured Gibbons Creek on that chilly October morning, I took in a view that had been lost for more than half a century—the view of Gibbons Creek flowing directly into the Columbia River. All of that construction equipment had removed (and moved) two miles of the levee. As far as construction projects go, it was remarkable. And the habitat benefits are extraordinary. Salmon have a critical new resting place along their arduous trek up the Columbia, as do migratory birds making their long journey up and down the Pacific coast. With a constantly developing landscape, drought, and climate change, these species all face complex challenges, and the Steigerwald project is an on-the-ground component of a complex solution.

The scope of what’s been accomplished made me appreciate the essential role Friends played in this project with the purchase of the Steigerwald Shores tract. Like everyone involved in this effort, from the funders to the construction crew, our contribution was critical to the overall success of the largest floodplain restoration project on the lower Columbia River.

Over the coming winter months, more than 300,000 trees and shrubs will be planted and the new hiking trail will come into shape. When it reopens in April, visitors to the refuge will not only enjoy a longer route, but a more engaging stroll as the path winds through cottonwoods and marsh. Take a moment when you cross the new bridge over Gibbons Creek to appreciate the stunning view of its connection to the Columbia—and appreciate the extraordinary effort of the countless people who moved mountains to make this happen. 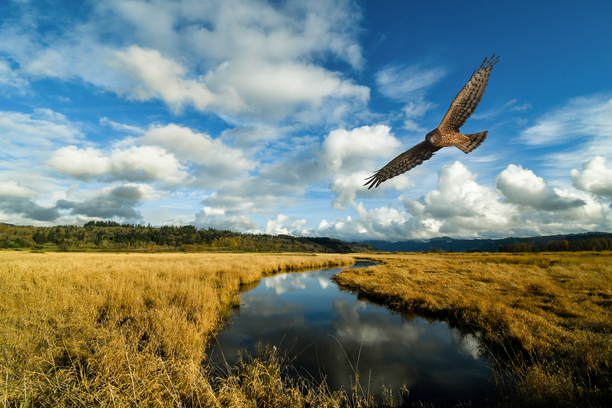 Editor's note - behind the lens

“This shot is a composite photograph combining two photographs shot from the same location within a few minutes of each other. I had set up a tripod and took a landscape photo of the Steigerwald vista during amazing circumstances, the light, the reflective water, and the puffy clouds with blue sky. The base shot was done with a Nikon D500 with a Nikon 10-20mm wide angle lens.

“I immediately put on a Nikon 200-500mm lens and shot a northern harrier female multiple times cruising the same area in the same direction as the first shot. She was shot at 500mm. I decided to try my hand at doing composites and brought her in for a hyper-realistic shot that is more true to how our eyes perceive these things, versus zoomed completely in on the harrier.”