June 3, 2016: A Union Pacific unit oil train burns after derailing in Mosier, OR. (photographer: Paloma Ayala)
The production boom in the Bakken oil fields of North Dakota resulted in an explosion of oil train traffic throughout the United States. Starting in September 2012, oil train traffic in the Columbia Gorge went from zero to a high of 60 million gallons per week.

Multiple proposals to build oil terminals in the Pacific Northwest, including what would have been the nation’s largest oil terminal at the Port of Vancouver, WA, would have resulted in an additional 100-plus oil trains rolling through the Columbia Gorge weekly, posing an unacceptable risk to communities and the environment. 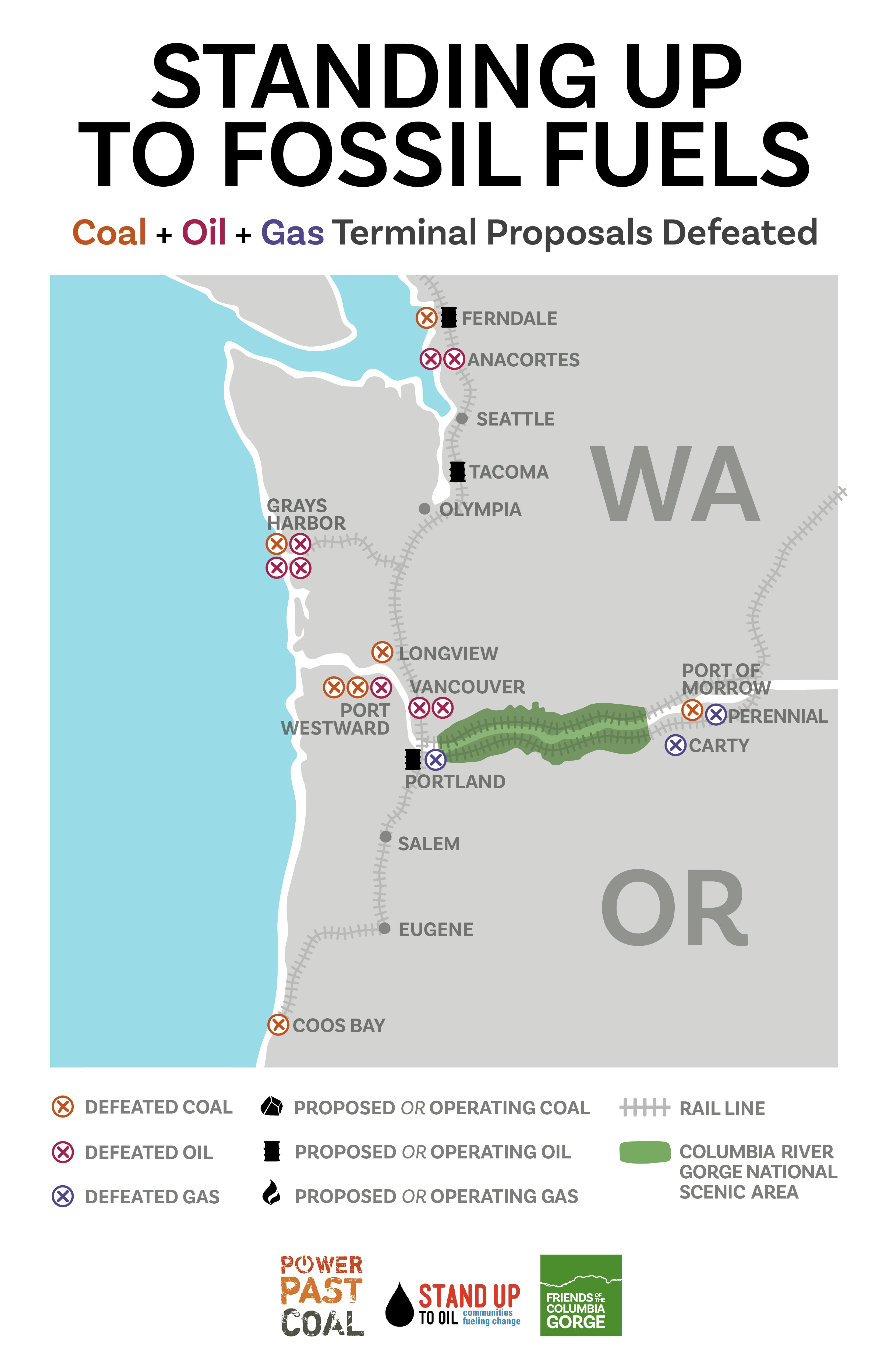 Summer 2019: On June 29, the Oregon Legislature approved a bill (HB 2209) with bipartisan support to better prepare Oregon to respond to oil spills from high-hazard trains that carry millions of gallons of crude oil through the state. The bill passed 56 to 3 in the House on June 17 and was approved 26 to 1 (with one absent, one excused) in the Oregon Senate today. The governor has five days to take action after the enrolled bill is sent to the governor's office.

"Oil trains will never be safe, but thanks to legislators who supported HB 2209, the Columbia Gorge and communities across Oregon will be better protected from oil train derailments and spills," said Michael Lang, conservation director for Friends of the Columbia Gorge. Read more.

Spring 2018: All of the new oil terminal proposals in the Northwest have been defeated, thanks to the dedication and commitment of our partners, activists and volunteers. The largest proposal was the Vancouver Energy project located on the banks of the Columbia River at the Port of Vancouver, WA. This crude oil by rail terminal would have been the largest in North America, resulting in 15 million gallons of crude oil per day traveling through the Columbia River Gorge National Scenic Area in dangerous rail cars. Washington Governor Jay Inslee denied the project due to unacceptable risk to public safety and the environment.

Those other proposed terminals included: three in Grays Harbor (Westway, Imperium, and U.S. Development); a proposal from Shell in Anacortes; and a smaller facility in Vancouver called NuStar. Four existing refineries throughout Washington continue to pursue oil export plans, but the main threat of new terminal proposals, particularly the one by Tesoro in Vancouver, have been defeated.

You can view more information on these and other fossil fuel export projects on Sightline’s interactive map: Mapping the Thin Green Line.
On June 3, 2016, an event concerned officials and citizens in the Gorge had feared came to pass: A Union Pacific unit train carrying nearly three million gallons of oil derailed as it passed by the town of Mosier, OR, in the Columbia River Gorge National Scenic Area. Sixteen tanker cars derailed; 42,000 gallons of oil were spilled, fouling Mosier's sewage system and seeping into the Columbia River. The volatile oil ignited, causing a fire that took 14 hours to extinguish and sending up a plume of smoke that could be seen for many miles around. And this was far from a worst-case scenario: Had the high winds of a typical late spring day in the eastern Columbia Gorge been blowing, a much more catastrophic event would have occurred. The Gorge got very lucky - this time - but the fact remains: Oil by rail is unsafe. Since 2013, several oil train accidents in North America have killed 47 people, spilled millions of gallons of oil into waterways, forced the evacuation of thousands, and caused billions of dollars in property damage and environmental destruction. We cannot allow this in the Columbia Gorge.

With rail lines operating on both sides of the Gorge, the only sea-level route through the Cascade Mountains, the National Scenic Area and its communities face rising chances of a catastrophe as Northwest regulators consider numerous oil train terminal proposals. Anticipating a major increase in fossil fuel trains, both the Burlington Northern Railway and Union Pacific Railroad are proposing major expansions of rail through the Gorge. The construction of new tracks would endanger wetlands, fish and wildlife habitat, cultural resources, recreation and public safety. Double tracks would result in more large trains moving at higher speeds through the National Scenic Area and its communities.

Friends of the Columbia Gorge is a member of the Stand Up to Oil coalition.

The Tesoro Savage oil terminal would result in four additional oil trains, each a mile-and-a-half long and carrying millions of gallons of explosive Bakken crude, rolling through the Columbia Gorge every day.

Sign up for Action Alerts to get updates on public hearings, comment periods, events and other ways you can make a difference.

Oil terminal proposals in the Pacific Northwest could result in a total of 100 oil trains moving through the Gorge weekly.