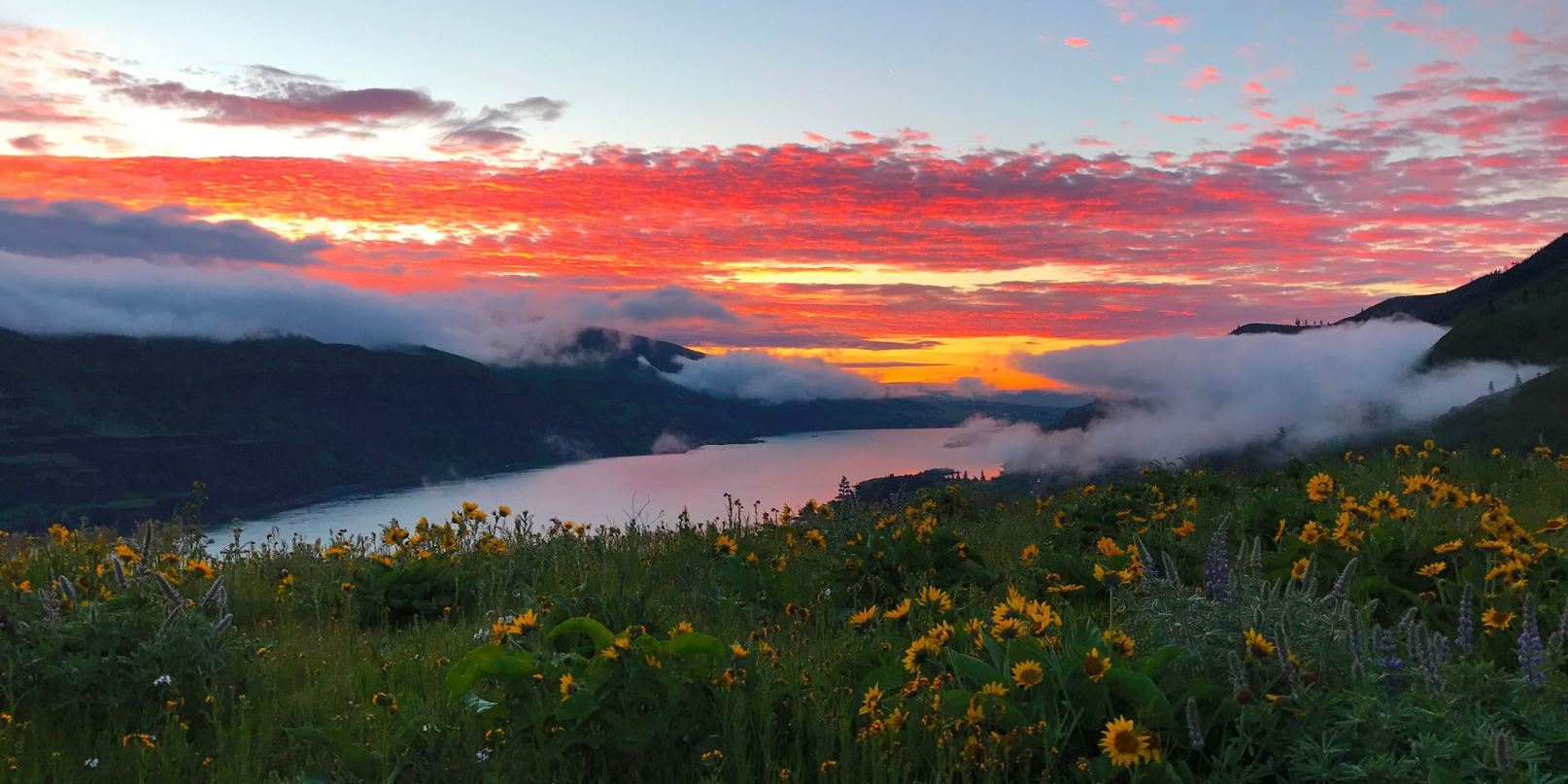 The Columbia Gorge is one of our planet’s most stunning places.

The Columbia River snakes through this spectacular canyon on its westward journey before joining the Pacific Ocean. Nowhere else on earth exists such a wonder of desert and forest, cliffs and waterfalls, sun and rain. It’s the only place in the world where a mighty river crashes through an entire mountain range.

The Gorge stretches 85 miles from its eastern edge at the confluence of the Columbia and Deschutes rivers to the westward edge of the Portland metro area. The Columbia River divides Oregon and Washington, yet here it unites millions of people drawn to the Gorge’s remarkable natural and cultural riches.

The Gorge was crafted over eons, even before the Cascades rose, and its cataclysmic history of volcanic eruptions, massive floods, and landslides is still evident today. The Gorge’s formation began 40 to 60 million years ago, when molten lava pressure pushed up granite to frame the Columbia Basin.

Between 6 to 17 million years ago, ancient volcanoes erupted, streaming more than 20 massive basalt flows into the area that’s now the Gorge. They formed rock layers up to 2,000 feet thick, cutting the canyon and becoming most of the rocks in the Gorge today.

The Columbia River, the only sea-level route through the Cascades, still carves canyon walls that can soar 4,000 feet. Rock pillars jut from the river, monoliths perch atop cliffs, and smaller canyons branch off from the Gorge. Surrounding mountains reach even higher, including Mount Hood to the south of the Gorge and Mount St. Helens to the north. Both are active volcanoes, and Mount St. Helens’ 1980 eruption remains the country’s deadliest.

Beyond the iconic canyon and glittering river, the Gorge boasts extraordinary landscapes, habitats, and biodiversity. A range of ecosystems and micro-habitats extend along its length, from arid grasslands in the east to temperate rainforests in the west. And as the land rises from river to mountaintops, riparian areas and wetlands transition to alpine crags and meadows.

With Native Americans as the Gorge’s first residents and stewards, the Gorge’s human history stretches back 10,000 to 15,000 years. For millennia, Native Americans made their homes, traveled, and traded along the river. Tribes from around the Pacific Northwest gathered to fish at Celilo Falls.

The Gorge was a natural travel corridor for Native Americans — and later, for explorers, settlers, and traders from Europe and the eastern United States. In 1805-1806, Lewis and Clark famously explored and wrote extensively about the Gorge. Their expedition and others opened the area for thousands of Oregon Trail pioneers, who largely displaced Native people from their lands and communities.

Today the Gorge hosts 13 designated urban areas: Cascade Locks, Hood River, Mosier, and The Dalles in Oregon, and North Bonneville, Stevenson, Carson, Home Valley, White Salmon, Bingen, Lyle, Dallesport, and Wishram in Washington. And throughout the Gorge, museums, historic landmarks, and interpretive centers connect today’s thriving communities with the rich history of generations that came before and the ongoing cultural traditions and practices of regional tribes.

Sunrise viewed from Carson Ridge on the Washington side of the Columbia River. (photographer: Chris Van Ness)

And it is fragile

While the Columbia Gorge remains an active commerce corridor, both by river and rail, it continues to change. The Gorge became a National Scenic Area in 1986 by an act of Congress to protect and enhance its scenic, natural, cultural, and recreational resources. The 292,000-acre Columbia River Gorge National Scenic Area is the United States’ largest and most populated scenic area, home to more than 75,000 people. Native Americans still celebrate their traditions rooted in the Gorge and shape the area’s future, including by working to protect natural, cultural, and scenic assets.

The Gorge has a special meaning to millions of people. It feeds our souls and speaks to the history of those who came before us. It's a sanctuary for species that live nowhere else.

And it is fragile.

These wonders still face threats: development, fossil fuel transport, climate change, and even visitation. Ensuring that the Gorge remains a vibrant, living place—wondrous, wild, and open to all—is at the core of what Friends of the Columbia Gorge does.

Get involved with our work to protect, preserve, and steward the Gorge for future generations. Find out how to stay updated, volunteer, or give.