Back to Newsroom
A trail at the Lyle Cherry Orchard served as a firebreak. (photographer: Sara Woods)

This year, as of late August, the U.S. Forest Service had already responded to more than 55 fires in the Columbia Gorge, including a July fire on our popular Lyle Cherry Orchard preserve. With all six counties of the Columbia River Gorge National Scenic Area in an official state of extreme or severe drought, land managers are developing unprecedented strategies to manage wildfire threats. New policies recently approved by the Columbia River Gorge Commission, along with enhancement of on-the-ground systems by land managers—including Friends’ land trust—will be vital in facing future challenges. But much more will need to be done. 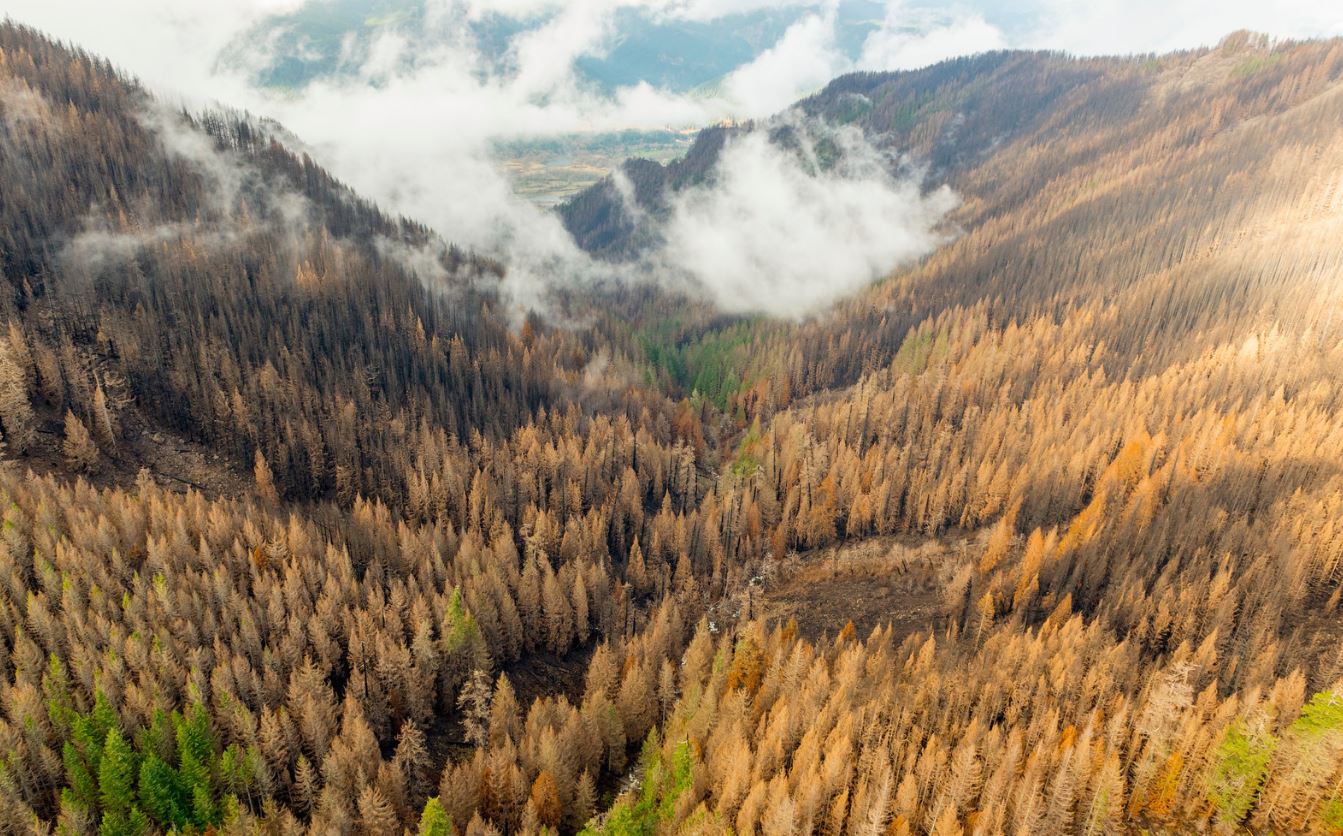 The 1986 Columbia River Gorge National Scenic Area Act requires protection and enhancement of natural resources and forest land, but it does not specifically mention climate change and fire resilience. The original Columbia Gorge Management Plan, adopted in 1991 and revised only once since then, didn’t contain even a single mention of climate change in the entire 500-page document.

In this era of historic drought conditions across the Pacific Northwest, the ongoing danger of natural and human-caused wildfires can be explosive. A 2015 heat wave resulted in deadly water temperatures for Columbia River salmon, and ultra-dry conditions set the stage for the 2017 Eagle Creek fire. Both were clear messages that climate change was directly affecting the Gorge.

Starting in 2016, Friends began advocating for inclusion of a climate chapter in the Gorge Management Plan and development of a climate action plan. Tribal nations, Gorge community leaders, and a passionate group of Gorge youth climate advocates joined in calling for immediate action to address the growing threat of climate change on the Columbia Gorge.

Eventually, the Gorge Commission and U.S. Forest Service heeded these calls and began taking necessary steps to address the climate crisis. The revised management plan, which was passed by the commission 9–2 last fall, includes a chapter on climate change; the requirement to develop a climate action plan; improved habitat protection for imperiled salmon runs; stronger wetland protections; and prohibitions on new houses in large-scale forest land. This is a start, but so much more needs to be done.

Friends is currently engaged with the Gorge Commission in developing a climate action plan that we hope will lead to adoption of new climate policies to meet the increased threat of wildfires and other climate impacts on the Gorge.

At the local level, we are working with climate advocates and elected officials in Gorge communities to pass climate resolutions and develop climate action plans. In the past two years, Hood River, Oregon, and Bingen and White Salmon in Washington have adopted climate resolutions with the support of Friends and local community leaders.

Wildfires are a natural feature of the Pacific Northwest, and they aren’t new to the Gorge or to Friends’ land trust. Over the decades, fire has touched several of our preserves and properties. In 2018, we updated all our emergency fire management plans for our preserves to ensure we had turn-key resources available for regional fire responders. This summer our planning was put to the test. 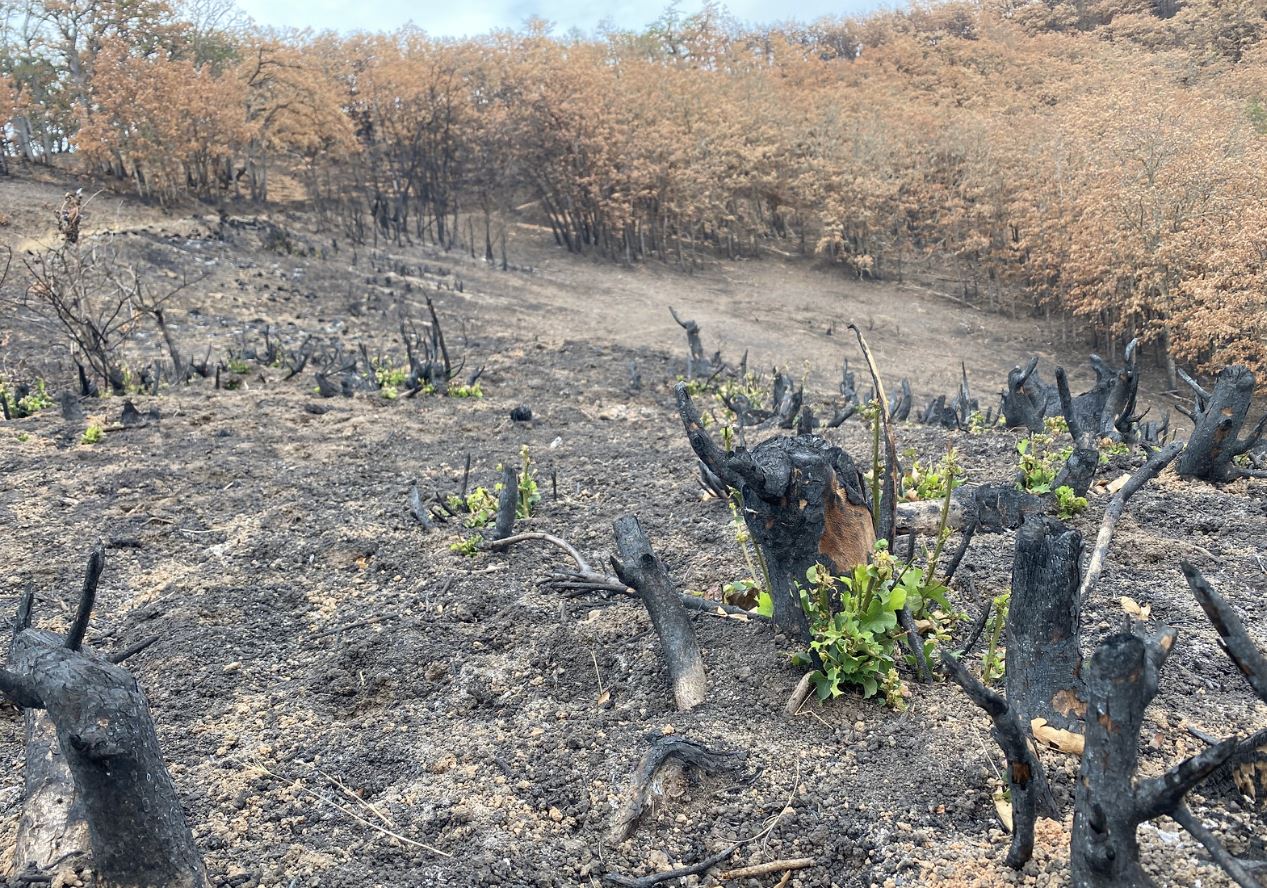 On the evening of July 12, a fire started above Lyle, Washington, and quickly grew due to the drought conditions. Pictures soon emerged on social media of glowing hills above Lyle and a plume of smoke.

Over the coming days, the fire moved east onto our Lyle Cherry Orchard preserve and burned nearly 100 acres of open oak grasslands. It could have been much larger and more destructive, if not for the exceptional efforts of wildland firefighters and a fortunate break in the weather conditions.

Like so many wonderful places in the Gorge, the Lyle Cherry Orchard is open to the public. But fortunately, on that hot July evening nobody was using our trail and we were able to close the preserve early the next morning.

The initial hours of a wildfire are frantic as teams try to assess whether hikers might be at risk on trails or in campgrounds. Information is sometimes scarce. In mid-July, having turn-key plans ready—including topographical maps of our preserve and lists of the important natural, cultural, and other resources—enabled the front-line agencies to quickly close the Lyle Cherry Orchard trail and respond to the fire.

It is becoming increasingly clear that we need to think about climate change, wildfire risk, and land management differently. During extreme conditions, trail closures may be the best action for land managers to take to protect visitors, firefighters, communities, and the places that we love.

Beyond that, though, we need to build accompanying policies and systems into the new Columbia River Gorge Management Plan to provide the tools that Gorge leaders and land managers will need to develop robust climate and wildfire resilience throughout the Columbia Gorge.