A section of trail at the Lyle Cherry Orchard Preserve serves as a dividing line between scorched land and an area left relatively untouched by July's Lyle Hill fire. (photographer: Sara Woods)

On Monday, July 12, the Lyle Hill fire broke out in the hills east of the Gorge community of Lyle, Washington. The fire grew substantially overnight into Tuesday, July 13 due to high heat and gusty winds, threatening a power sub-station and several residences. Fortunately, several days of cooler and more moist weather conditions, plus the coordination and dedicated work by fire crews led by the Washington Department of Natural Resources and the U.S. Forest Service, resulted in the Lyle Hill fire maxing out at 135 acres, with no structures lost. The fire was 90% contained by Friday, July 16. No cause of the fire has yet been announced by authorities. 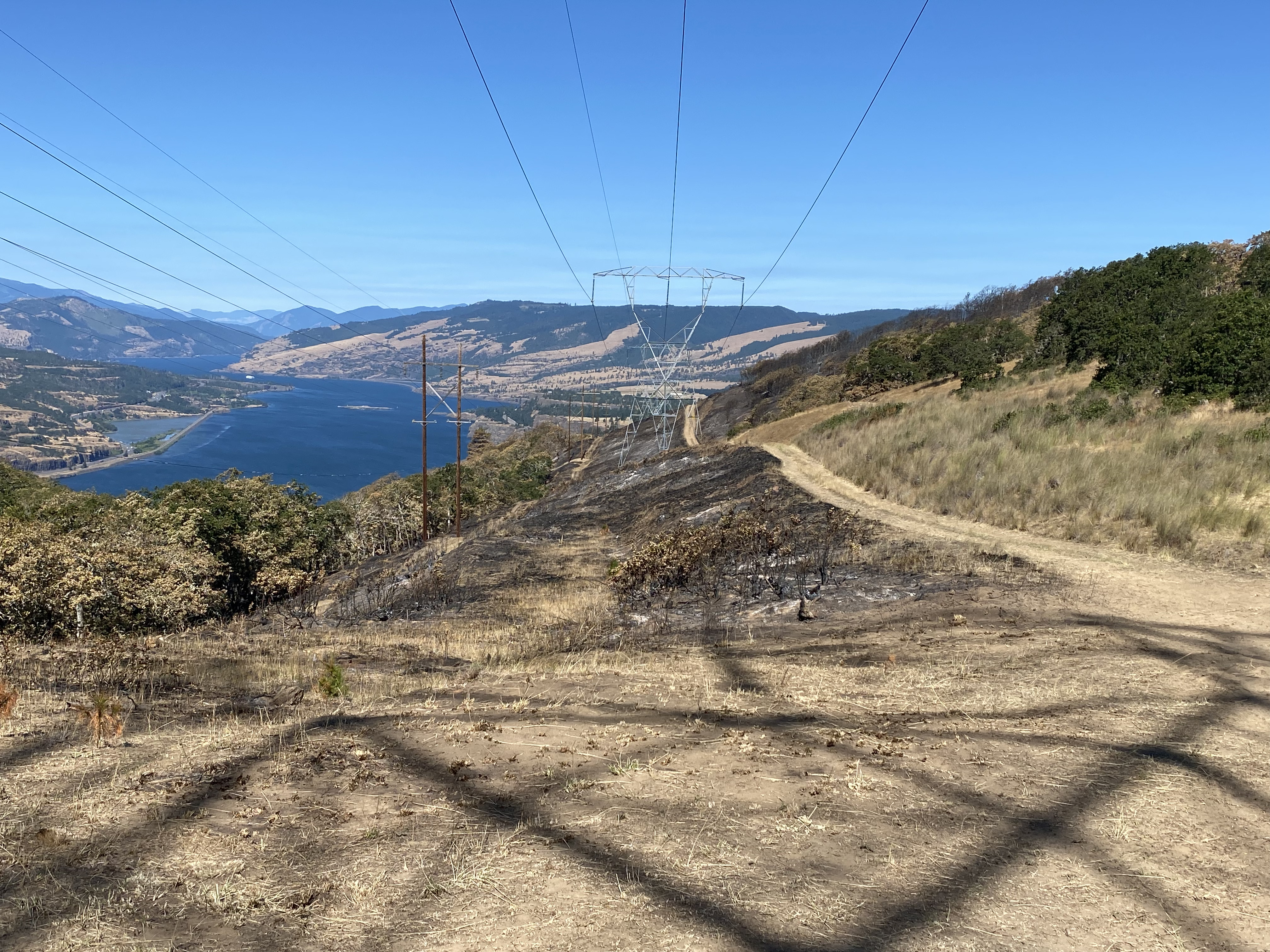 As a local land owner in Lyle—the Lyle Cherry Orchard preserve is owned and managed by Friends of the Columbia Gorge Land Trust—Friends was concerned for both the Lyle community and the surrounding natural areas. About two-thirds of the area burned by the Lyle Hill fire was on the preserve.

On Friday, July 23, we had the opportunity to safely inspect the preserve to initally assess the fire's damage to the land and trails. Here's a short summary of this assessment:

Friends would like to express our deep gratitude to the first responders and fire fighters who mobilized and worked to protect community members and quickly bring this fire under control.

About the Lyle Cherry Orchard preserve

Lyle Cherry Orchard is a 540-acre preserve—owned, managed, and stewarded by Friends of the Columbia Gorge Land Trust—located on the Washington side of the Gorge with a variable-distance (out-and-back with two loops) trail near the community of Lyle. This property gains over 1,500 feet of elevation with cake-layered basalt walls carved by the Ice Age Floods. Friends founder Nancy Russell purchased the property piece by piece in the 1990s and later donated it to Friends in 2009. Nancy purchased the property when it came up for sale because it was within key viewing areas on the Oregon side of the Gorge and would have most likely become subdivided for development. The trail at Lyle Cherry Orchard was created shortly after Nancy purchased the property and has been open to the public and maintained Friends and its land trust ever since. Working with the Washington Trails Association, between 2019 and 2021 the land trust added two loop trails to the original trail.