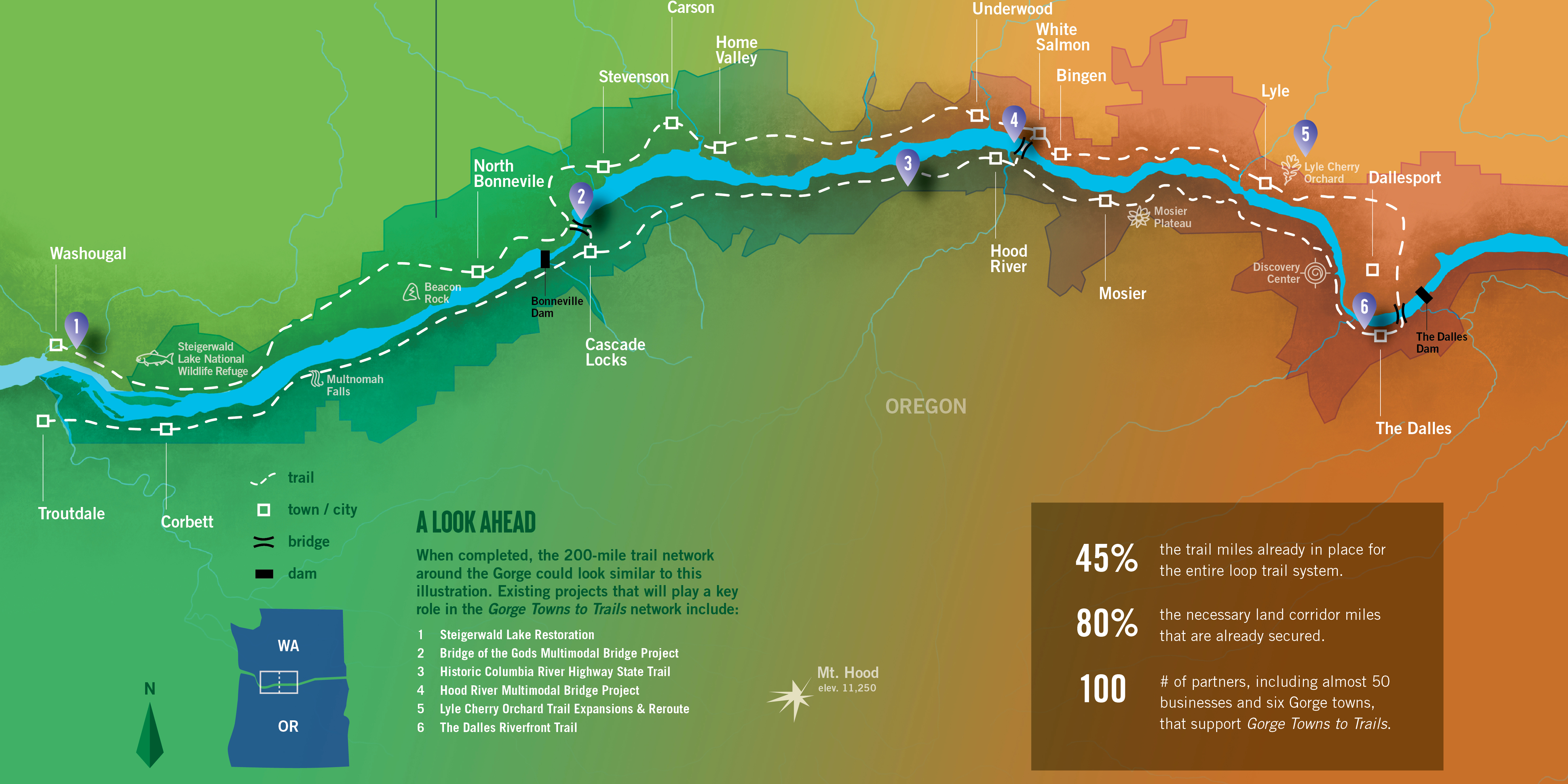 
Gorge Towns to Trails is an initiative to create a world-class trekking network encircling the Columbia Gorge. The 200-mile loop trail network would connect communities with recreation, promote alternative transportation options, and create contiguous parcels of protected lands that benefit wildlife. It also would serve as an innovative tool to disperse congestion at popular trailheads and introduce people to spectacular, but less visited, areas of the Gorge.

More Than a Trail

From advising on highway congestion to helping secure funding for local park and trail connections, Gorge Towns to Trails is building future systems to better manage Gorge recreation areas and promote alternative transit use. This includes efforts led by Gorge Towns to Trails' staff to assist community partners in exploring the Bridge of the Gods Multimodal Bridge Project, developing the Columbia Gorge Express bus system, and engaging the public on key safety and traffic revision proposals for the Historic Columbia River Highway and Washington State Highway 14.

In 2016-2017, four properties totaling 242.7 acres were acquired through the Preserve the Wonder campaign, closing trail gaps in Washington. For these three sections, 93 percent of the land corridors are now secured and 35 percent of the trail miles are in place. These eight Gorge communities will benefit from increased economic activity when the segments are complete. The Washougal-to-Cascade Locks corridor is the closest to the goal; it is one mile from completion.

In 2017, Gorge Towns to Trails also was designated a statewide priority for Oregon as a signature trail in the state’s Outdoor Recreation Initiative. This 15-year vision focuses on providing visitors with world-class recreation experiences and infrastructure, among other goals.

And in December 2021, Rep. Earl Blumenauer (D-OR), readying new legislation to introduce in Congress, released a four-page summary outlining concepts (download) for added protections and enhancements to the Columbia River Gorge National Scenic Area and the Mount Hood National Forest. Within the concepts is support for Friends’ Gorge Towns to Trails vision.

Now is the time to rethink how we manage the Gorge’s 100-year-old trail system and address challenges within existing systems, such as traffic congestion along the Historic Columbia River Highway and over-use of popular trails. Gorge Towns to Trails is an opportunity to build stronger connections between Gorge community leaders and engage state and federal agencies to explore new approaches to age-old problems.

To learn more about how you can join as a supporter or partner please contact Gorge Towns To Trails Project Manager Renee Tkach at renee@gorgefriends.org.

"The Gorge Towns to Trails has been a great influence and has provided supportive partnership with the Port of Camas-Washougal. Throughout our Washougal Waterfront Trail and Park project, they have helped guide us through the funding process as well as been an advocate in helping this project become a reality. The Port looks forward to continuing our partnership and seeing the Gorge Towns to Trails project reach its full potential from Washougal east into the Gorge." - David Ripp, Executive Director of Port of Camas-Washougal

Since the project’s launch, Gorge Towns to Trails has made significant progress with 45% of the trail miles already in place for the entire loop trail system and 80% of the necessary land corridor miles have already been secured. Below is a closer look at where the project is with a look ahead by geographic segments of the loop, east to west. 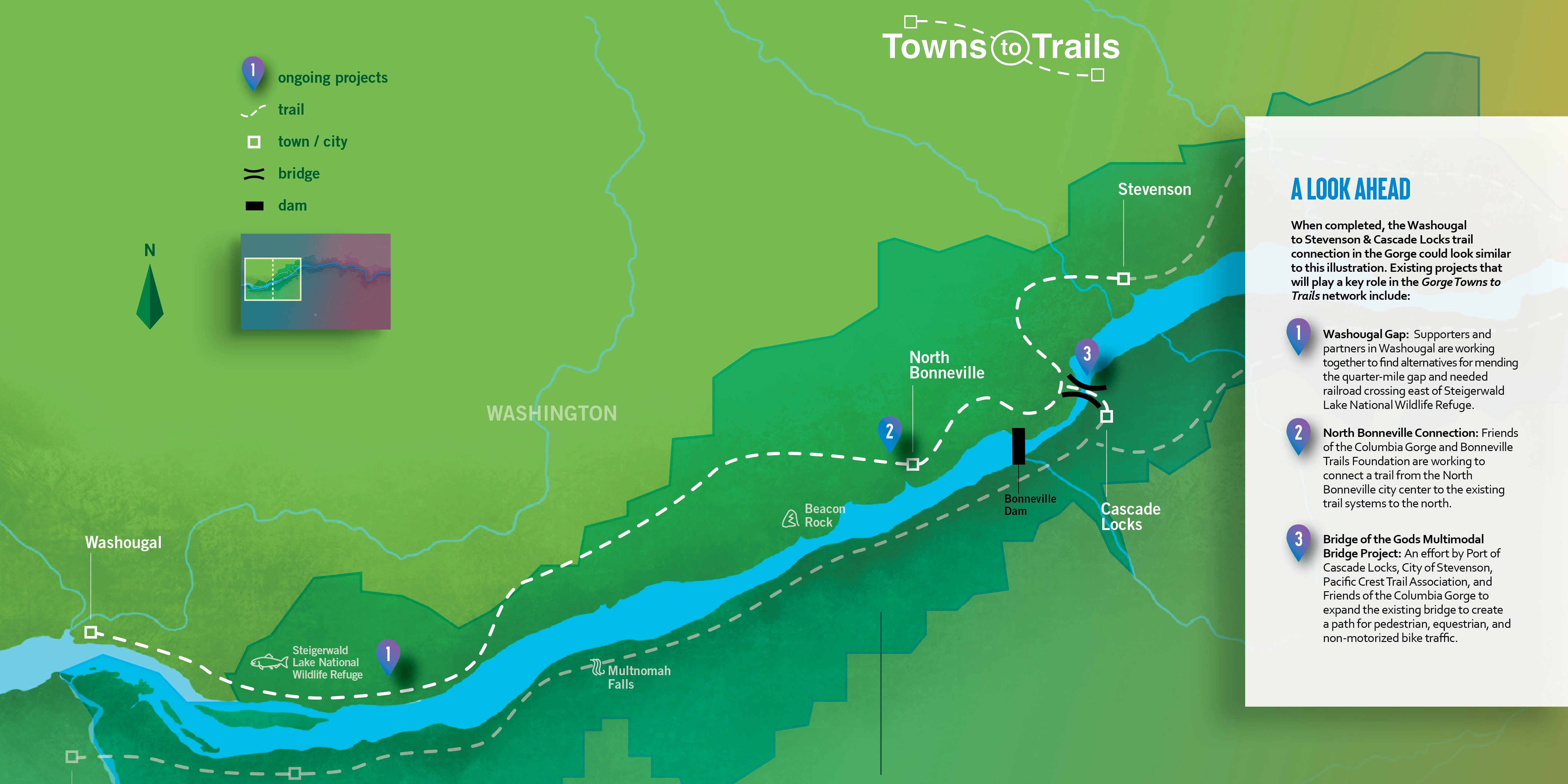 This 34-mile segment will connect parks, refuges, and trails as well as the communities of Washougal, North Bonneville, Stevenson, and Cascade Locks.

When completed, the Washougal to Stevenson & Cascade Locks trail connection in the Gorge could look similar to the above illustration. Existing projects that will play a key role in the Gorge Towns to Trails network include:

Washougal Gap: Supporters and partners in Washougal are working together to find alternatives for mending the quarter-mile gap and needed railroad crossing east of Steigerwald Lake National Wildlife Refuge. North Bonneville Connection: Friends of the Columbia Gorge and Bonneville Trails Foundation are working to connect a trail from the North Bonneville city center to the existing trail systems to the north.

Bridge of the Gods Multimodal Bridge Project: An effort by Port of Cascade Locks, City of Stevenson, Pacific Crest Trail Association, and Friends of the Columbia Gorge to expand the existing bridge to create a path for pedestrian, equestrian, and non-motorized bike traffic.

Friends of the Columbia Gorge has partnered with the Port of Cascade Locks, Pacific Crest Trail Association, and the City of Stevenson to build a pedestrian, equestrian, and bicycle path on the Bridge of the Gods. This critical infrastructure improvement would not only provide safe access for future pedestrians and bicyclists, but could create a key link with other Gorge trails, such as the recently completed Trail of the Gods in Skamania County. Partners continue to work together to secure necessary funding for this project. 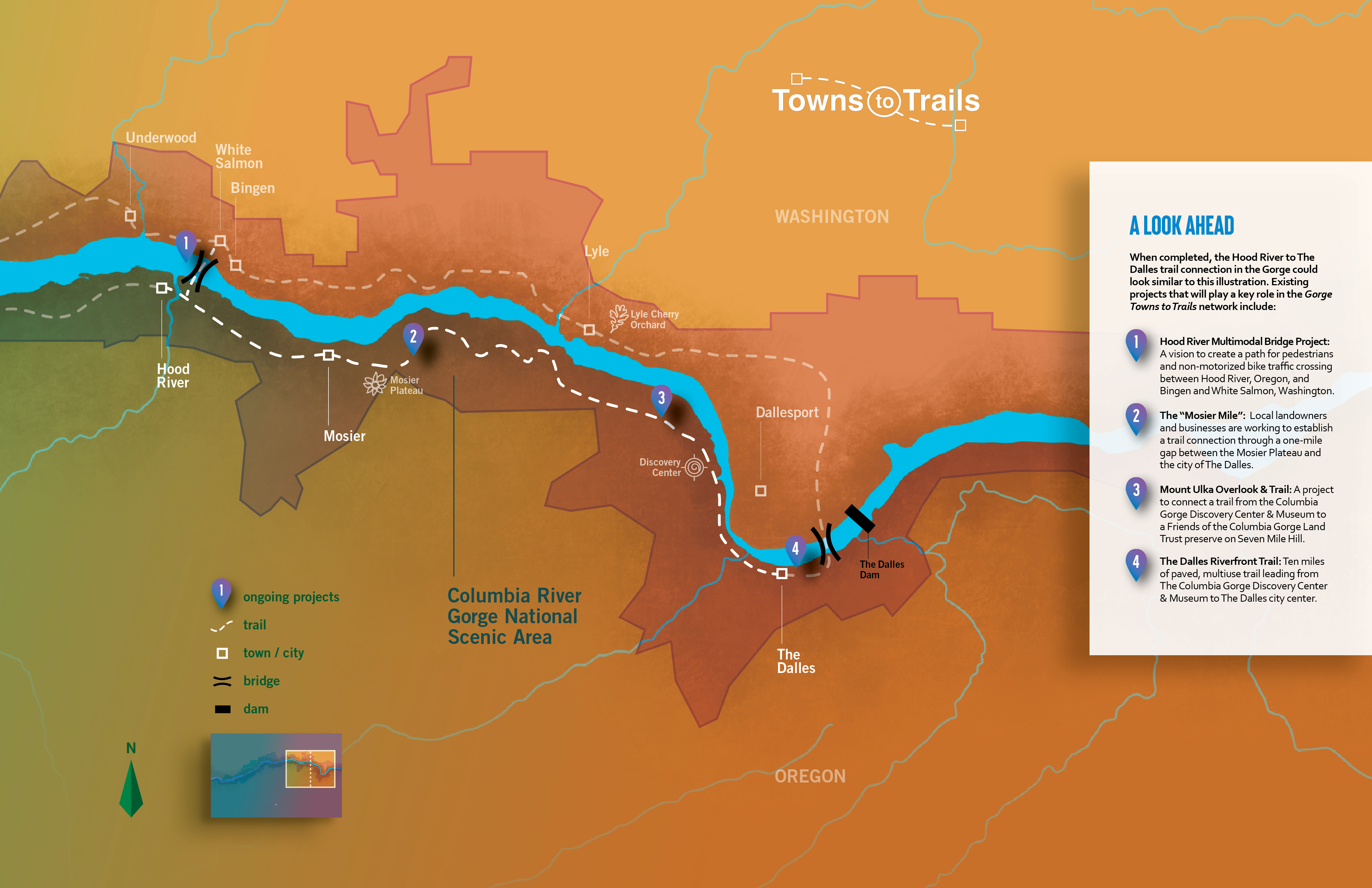 Hood River to The Dalles

This 22-mile segment will connect parks, preserves, and established trails, as well as the Oregon communities of Hood River, Mosier, and The Dalles.

When completed, the Hood River to The Dalles trail connection in the Gorge could look similar to the above illustration. Existing projects that will play a key role in the Gorge Towns to Trails network include:

The “Mosier Mile”: Local landowners and businesses are working to establish a trail connection through a one-mile gap between the Mosier Plateau and the city of The Dalles.

In 2013, Friends of the Columbia Gorge Land Trust purchased 167 acres of land plus two-thirds mile of trail easement on Seven Mile Hill, just west of the Columbia Gorge Discovery Center & Museum. In 2015, the U.S. Forest Service purchased 119 acres from Friends, leaving 48 acres that remain in the ownership of Friends’ land trust. Friends is working with the City of The Dalles, Wasco County, and other local stakeholders to create a new trail connection on the Mount Ulka property that will connect to the Discovery Center and The Dalles Riverfront Trail. 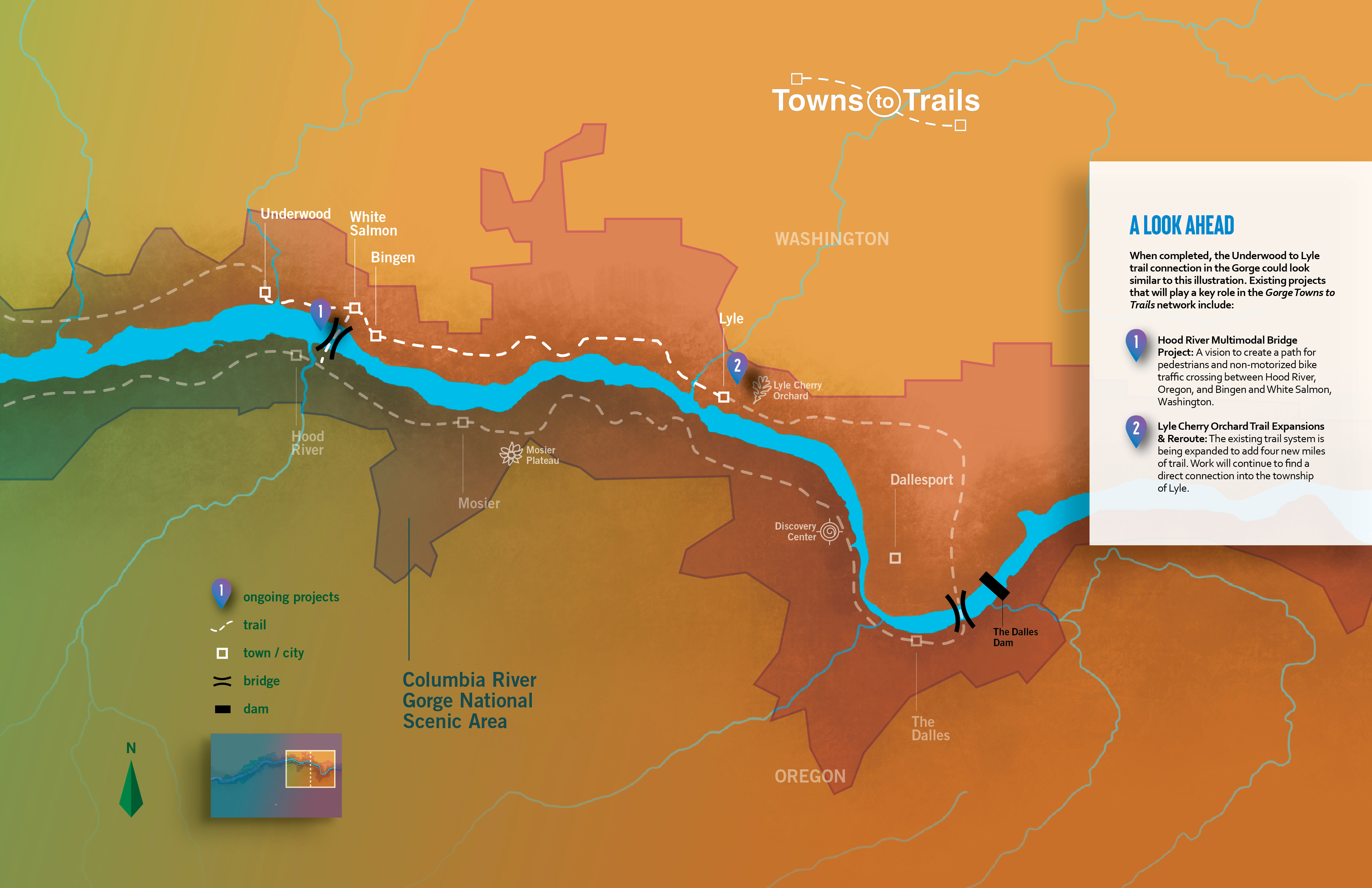 This 13-mile trail segment will connect parks and established trails, as well as the communities of Underwood, White Salmon, Bingen, and Lyle.

When completed, the Underwood to Lyle trail connection in the Gorge could look similar to the above illustration. Existing projects that will play a key role in the Gorge Towns to Trails network include:

Lyle Cherry Orchard Trail Expansions & Reroute: The existing trail system is being expanded to add four new miles of trail. Work will continue to find a direct connection into the township of Lyle.

Perched above and east of the community of Lyle, Washington, this former cherry orchard has been a place of trailblazing innovation for over a century. The 540-acre preserve owned by Friends of the Columbia Gorge Land Trust, has undergone a dramatic transformation in the recent years.

Friends and Washington Trails Association (WTA) partnered between 2019 and 2021 to build an additional three miles of trail, with two new loops: one to highlight the site of the long-abandoned namesake cherry orchard and another that wraps around the iconic “Lyle” sign.

Friends’ long-term goal is to connect the trail into Lyle as a key component of Gorge Towns to Trails, an effort to create a loop trail around the entire Gorge, connecting Gorge communities. The Lyle Cherry Orchard trail expansion project is the second Gorge Towns to Trails accomplishment, following the Mosier Plateau trail completed in 2013.

Status of the Larger Vision for Gorge Towns to Trails