Olympia, Washington – Washington State Parks, with critical assistance from Friends of the Columbia Gorge, purchased a 4.5-acre tract of land next to Beacon Rock State Park. That land will be used to create safe, accessible pedestrian crossings, a new entrance and egress, and additional parking. Currently, State Route 14 runs through the busy, popular park, which offers hiking, boating, rock climbing, birding, conservation and equestrian activities on both sides of the highway. This poses safety hazards for drivers and pedestrians, including limited visibility and heavy, fast-moving traffic. Several accidents happen there each year. 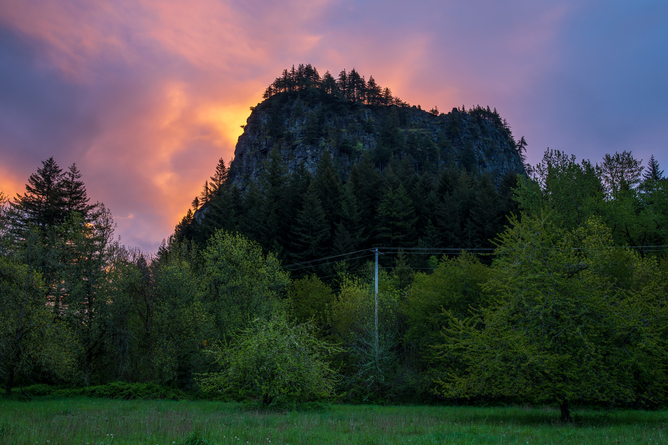 In 2019, Friends of the Columbia Gorge Land Trust bought a property on the north side of SR 14 from a local couple, Sharon and John Jamieson, who wished to see the land used wisely for recreation. Friends understood that State Parks wished to buy the land, but the agency did not yet have funds for the acquisition. Parks was able to purchase the property from Friends with funds from an Recreation Conservation Office Inholdings Grant, which provides funding to purchase properties within or adjacent to existing state parks. The sale closed June 13.

Future plans include a new parking lot, roundabout, and ADA-accessible underground pedestrian crossing, all of which will ease congestion, create safer traffic flow, and allow foot and wheelchair access between the north and south sides of the park. The estimated project cost will be $25 million.

State Parks leaders, planners and Beacon Rock staff say projects like the one at Beacon Rock cannot be done without support from such partners as Friends of the Columbia Gorge.

“We thank Friends of the Columbia Gorge for their invaluable partnership and support, which allowed us to realize the initial phase of this project,” said State Parks Ranger Heath Yeats, who oversees Beacon Rock.

Beacon Rock State Park is the first stop for many on the Washington side of the Columbia Gorge. The park typically receives 250,000 to 300,000 visitors a year.

“This project will not only provide a safer, more welcoming entrance to the park, but will be vital in helping increase accessibility at one of the most iconic recreation spots in the Gorge,” said Renée Tkach, a project manager with Friends of the Columbia Gorge and a local Skamania County resident.

Washington State Parks looks forward to a continuing collaboration with Friends of the Columbia Gorge and to working with and updating members of the public, local government officials, non-profits and neighbors when the work begins.