Ever since the founding of Friends of the Columbia Gorge, our organization has worked to engage and educate youth in protecting, stewarding, and preserving the Columbia River Gorge. Our youth hikes and outdoor education programs might be better known, but Friends also has a long tradition of working with young leaders interested in community advocacy.

This fall, a series of events largely spurred by Gorge student activists — in collaboration with other community activists — created real momentum in establishing the Gorge as a trail blazer in the effort to substantively address the global ecological crisis resulting from climate change. Born in the 21st century, today's teenagers face a future in which they could live long enough to see some of the worst projected effects of climate change become reality. 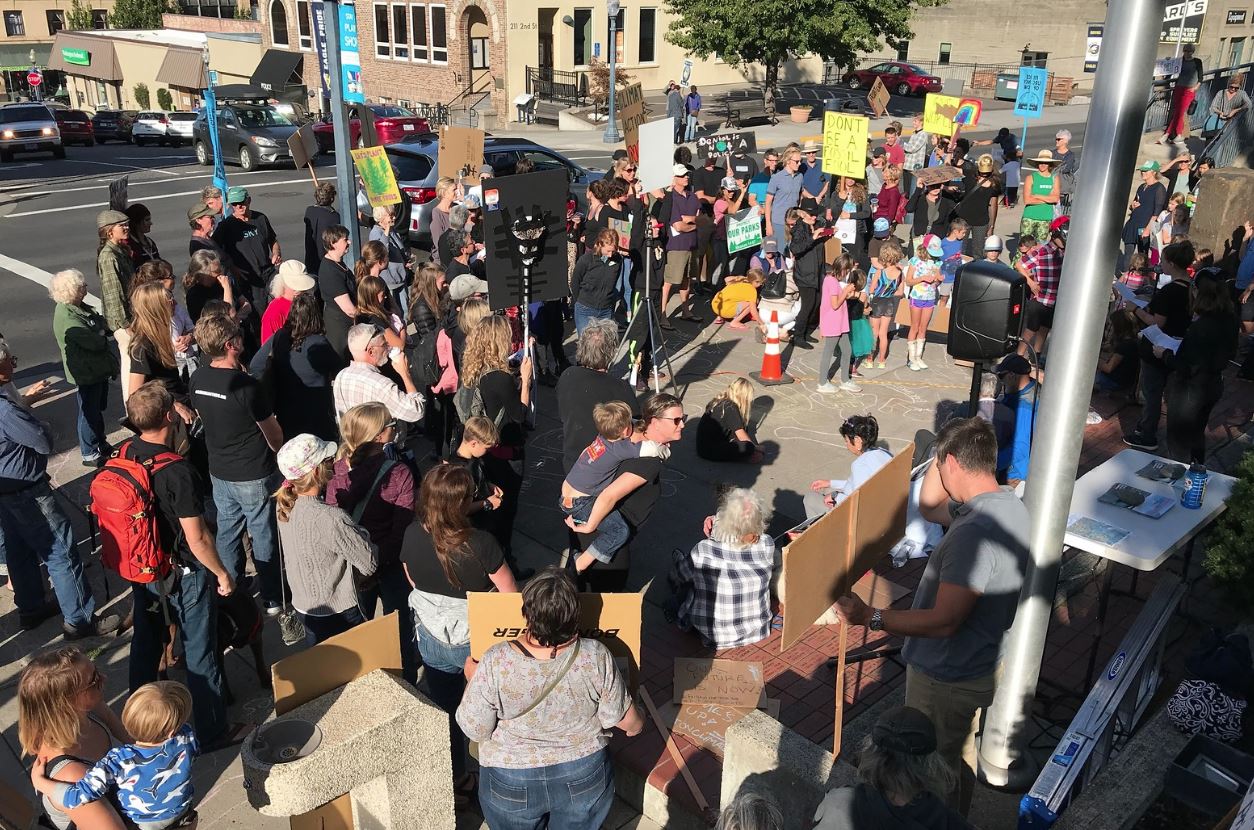 In late August, youth leaders in both the Gorge and Portland reached out to Friends to support activities planned for the September worldwide climate strike, inspired by 16-year-old Swedish climate activist Greta Thunberg.

In the Gorge, Friends worked with Lillie Tomlinson, co-leader of the Hood River High School Earth Action Club (Field Representative Peter Cornelison is an adviser to the club) and community leaders to support and advise on plans for the day-of climate strike rally.

“We don’t feel like we have a choice [but to take these actions]," Tomlinson said. "Politicians and fossil fuel companies have known about climate change for decades yet very little has been done. The quest for profit over life now threatens our very existence. The crisis is real and it cannot be ignored any longer. I worry about my future every day, this is a new reality for young people.”

In Portland, Friends staff helped organize an advocacy skills workshop for the public, with a special emphasis on the importance of the Columbia River Gorge Commission incorporating climate-change response into its 2020 Gorge Management Plan. Friends volunteers also gathered more than 200 signatures during the day opposing the Zenith Energy oil terminal expansion in Portland.

On Nov. 12, Hood River became the first Pacific Northwest city to pass a Climate Crisis resolution. The resolution that unanimously passed the Hood River City Council “[affirms] strategies to reduce Hood River’s contribution to global warming and to mitigate the effects of the climate crisis on the health and welfare of the citizens of Hood River....[and] initiate efforts to formulate adaptation and resilience strategies in preparation for intensifying climate impacts."

Before voting on the resolution, councilors heard testimony from activists with the Earth Action Club and the Columbia Gorge Climate Action Network (CGCAN), arguing the net-zero carbon emission target date of 2050 that the council had proposed (changed from 2030 in the original, activist-submitted proposal) was too late to make a difference, and that by delaying it would absolve current councilors of accountability. Two of Tomlinson's fellow student activists, Lottie Bromham and Lyric Emmons, gave testimony imploring them to revise the resolution.

"[By moving back the target date], you have failed the children of this city in the same way government officials all around the world have," Bromham testified. “Move up the zero carbon emissions date to 2035 because rapid, effective action needs to be taken in order to reverse the effects of climate change. And I can say one thing for sure, if nothing is done, the children of this town will not forgive you."

The councilors found their arguments persuasive and passed the resolution with the revised target date of 2035. Learn how the Hood River Climate Emergency resolution will work; Lottie Bromham and Kate McBride interview on OPB's Think Out Loud:

Listen to Think Out Loud Interview McBride, the Hood River mayor who also has a vote on the council, was impressed by Bromham and Emmons' testimony. Speaking in December about pointed comments Bromham made in regard to many of the councilors likely not being alive in 2050 to be accountable for such a far-off goal, McBride said, "It was her passion, the seriousness of her plea, that if we didn't do something, a lot of the people on Earth are going to perish, along with many [other] species. That was the urgency in her message."

Describing the recent increase in the frequency and severity of fires and drought in the Gorge and the Pacific Northwest, McBride, who grew up in the Gorge, added, "For my parents, who were born in 1924 and 1930, to comprehend the situation is very difficult. I comprehend it better, but the younger people, they're seeing first-hand at a young age these catastrophic things happening connected to climate change. So it's easier for them to be more passionate about it than the older people are."

Building on community energy following the climate strike, Friends has continued to help amplify voices of Gorge youth and community leaders speaking out on the threat of climate change to the Gorge. Going beyond Hood River, community activists have also demanded greater regional collaboration on the threat of climate change, speaking to an array of local leaders including at an October city council meeting in The Dalles. Numerous supporting op-eds and letters to the editor were also submitted to local news media.

Gorge youth and community climate activists also have offered comments at the Columbia River Gorge Commission’s Oct. 8 meeting in Cascade Locks, OR, and Dec. 10 meeting in White Salmon, WA. The management plan for the Columbia River Gorge National Scenic Area, which is currently under review, contains no mention of climate change despite current evidence of adverse effects from climate change on Gorge resources.

Youth and community leaders at the meetings, including Lottie Bromham who testified at the December meeting, urged the Gorge Commission to include mandatory steps in the 2020 management plan to identify how climate change is expected to impact all resources in the Scenic Area and put together a plan for mitigating those impacts.

Boonstra, who has worked with CGCAN since 2012, said being connected to a natural wonder makes Gorge residents also more sensitive to what threatens it.

"This place has its particularities in terms of what's going to draw people to the climate crisis," Boonstra said. "For me and I think for a lot of people, it was just the visual thing years ago of watching the coal trains and oil trains go back and forth and knowing, because you could see it out your window: the number of trains was increasing, unit trains were getting longer and more frequent." Boonstra said the 2016 oil train derailment, spill and fire in the nearby community of Mosier was a big wake-up call.

Bromham, Emmons, and Tomlinson cited the 2017 Eagle Creek fire as another galvanizing event for their climate activism.

The Earth Action Club at Hood RIver Valley High School began five years ago as the Climate Action Club. One of the founders was Boonstra's daughter, Charley.

"Charley felt early on that we were in this [climate change] situation and unlike older people, [students] were inheriting something which they were just brought into," Boonstra said in December. (Note: Charley Boonstra is now a student at the Evergreen State College in Olympia, WA, and doing intern work with Thurston County's Climate Action Team.)

Their activism began on a school level, he said. "Charley and her friends were sitting in the cafeteria and noticing the incredible amount of food that was thrown away, every lunch. [They decided] to do a composting program. The school wasn't going to provide the bins so they had to buy the bins and make the signs and come up with an agreement with the custodial service for how they were going to do the program. And gradually, they started working outside their own box." Boonstra said young people played a big role with the plastic bag ban that went into effect in Hood River in 2017.

"In the last couple of years, I've kind of gained my voice through activism," Emmons said. "I'm not afraid to speak up about climate change, which I'm passionate about."