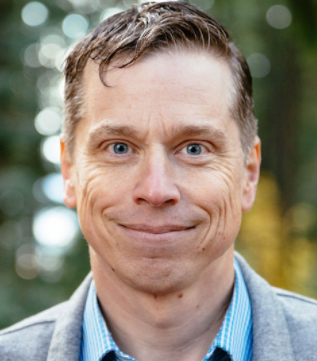 
For St. Andrew Nativity School history teacher Alex Park, the importance of connecting kids to nature became apparent while teaching at a Jesuit school in the Southside of Chicago. After his return home to Portland, Park jumped at the opportunity to work with Friends Executive Director Kevin Gorman in expanding a new partnership with St. Andrew to take students out to the Gorge. "I always teach about the Missoula Floods and Native American history to seventh graders. That's how Kevin and I first figured out a basic set up for the Gorge trip and how it could fit into the curriculum," said Park.

Over the past 11 years, Friends’ outdoor youth education programs have grown and evolved. Great Gorge Wahoo! serves low-income middle school students from Portland, some of whom have never set foot in the Gorge before. Explore the Gorge helps middle schoolers across the Columbia River in Washougal, WA, kids who otherwise would not have outdoor school. Together, the two programs have helped inspire and introduce the wonders of the Gorge to over 3,000 children. 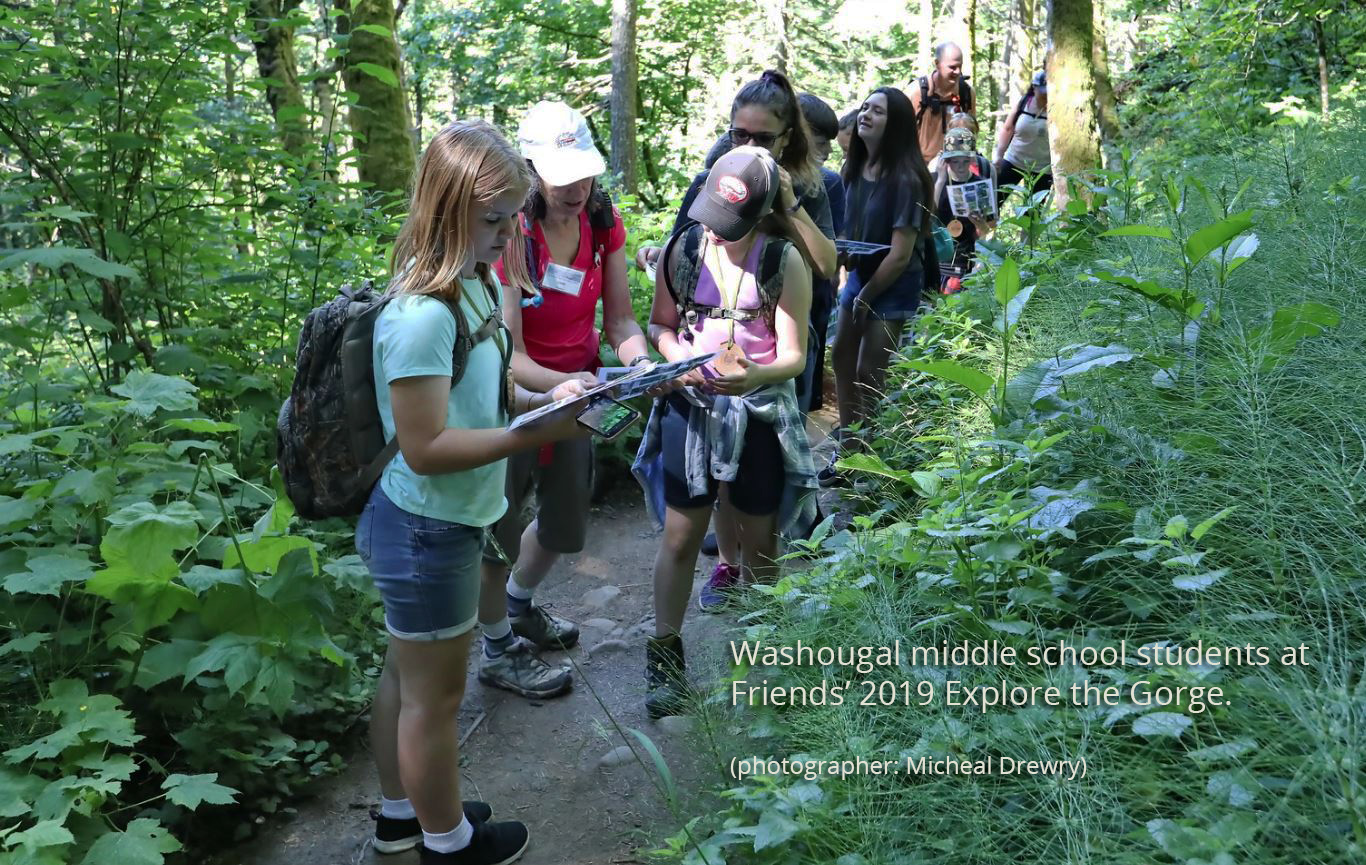 At the end of their sixth grade school year, in between year-end testing and summer break, nearly 300 sixth graders in the Washougal School District can be found out of their classrooms, using their senses to make their way through natural landscapes in the Gorge. Dedicated naturalist volunteers guide students outside, teaching about the Gorge’s unique qualities and providing space for kids to make discoveries on their own. Gazing up from the Hamilton Mountain trail they imagine the Ice Age floods covering the top of Beacon Rock, or Che che optin, meaning “navel of the world” in Chinookan. Distinguishing native plant species in the forest, they learn to identify the edible ones, tasting ripe thimbleberries, miner’s lettuce, and more.

Nate Keller, a language arts teacher at Jemtegaard Middle School, has accompanied students on Explore the Gorge field days since its first year in 2008. The program came along when students needed it most, Keller noted. “By 2008, the previous outdoor school hadn’t happened in maybe 20 years. State funding was gone,” he explained, “but Washougal schools tried to hold it together and give students some kind of similar experience.”

Longtime Friends member Phyllis Clausen, a conservationist with deep roots in the Gorge, recognized the need for a real outdoor school program. Friends staff worked with Clausen, to establish the Vic Clausen Youth Education Fund in her late husband’s honor and identified the Washougal School District as beneficiary. Grant funding from the Camas-Washougal Community Chest also supports the program each year.

One might think that having a renowned landscape in one’s back yard would ensure a natural connection to this environment for students from Gorge communities, but that’s not the case for many Washougal students.

“A lot of kids here are from lower-income households and are isolated from the Gorge,” Keller said, “because services are all located to the west, heading away from it. Poor mobility and lack of resources limit Gorge access.” For a great number of students, if they’ve been to the Gorge, it’s been on very few occasions.

With Explore the Gorge, Friends aims to ensure that all Washougal sixth graders get the chance to establish a real connection to the wonders of the Gorge and create lasting memories. "From this experience, I would want to learn more about the history of the Columbia River Gorge," a recent Explore the Gorge student commented. "It helps me tell people more about the history of where I’m from."

Founded in 2011, Friends’ Great Gorge Wahoo! offers middle school students at St. Andrew Nativity School in Portland two day-long field trips in the Gorge, one in spring and one in fall. St. Andrew provides students from low-income backgrounds with a college-prep education, and the student body includes a high percentage of students of color.

“We have to plant the seed right,” St Andrews teacher and Wahoo trip coordinator Alex Park noted, “showing them how close and peaceful the Gorge is. We know there are going to be kids saying ‘That was uncomfortable, my shoes got dirty, I don’t want to do that again.’ But more often they come back and say, ‘I had such a great time!’”

Friends’ program is supported by separate funds created in memory of Matthew Winthrop and Buddy Nobles. Matthew died of cancer in 2011 and was the son of longtime members Loring and Margaret Winthrop. Buddy was a member and volunteer of Friends who passed away in 2013. His wife Carrie Nobles currently serves on Friends' board of directors.

“Working with Friends gave Buddy a lot of pleasure during the last years of his life,” Nobles said. “After he died, I approached Friends about some sort of memorial for him. They told me about the spring Wahoo! idea. I thought it was a great idea and that Buddy would be proud."

After their son's death, Matthew’s parents said that after their son’s death they were looking for an opportunity to memorialize him by developing an ongoing program linked to education and conservation. Connected through a former Friends board member, the Winthrops and Friends staff explored ideas over several meetings with Friends staff before hitting on the concept of exposing students to the Gorge and giving them a foundation for being good environmental stewards.

"Matt loved the Gorge—its expanse, its beauty, and its vistas," the Winthrops wrote to Friends recently. "Hiking and camping in the Gorge energized him. As an anthropology major, he was attracted to the Native American history and lore of the region. Each time we go on the Wahoo, we know Matt would love the experience the students are having. It makes our hearts happy to see it continue. It's our way of honoring Matt and building hope for the future generations."

The impact of the experience lasts, too. Former students, some now in college, have told St. Andrews faculty and staff about fond memories made in the Gorge. “They love these trips,” said Park. “At the end of the year, I ask them about their favorite part of the year, and often it’s the Gorge trip.”

"A lot of these kids come from tough circumstances," Nobles said. "Many are already wary and watchful, but I see them getting excited as they compete in the scavenger hunt, dare each other to lick slugs, stand in awe in the misty spray of a waterfall, or ogle the fish ladder at Bonneville Dam. It's so rewarding to watch as these kids enjoy their special day."

Memories of the outdoor education experience linger, too. Park reached out to former students, some of whom now attending college, for their reflections. A few responses hint at a lasting influence:

For many of us, it was the first time we were taken into nature and exposed to hiking and appreciating the world around us. Now, I am a leader of the hiking club at my school.

The Gorge trip was an amazing time where I was able to appreciate the beauty of nature. It was also where I learned how one can really grow closer to others in a place away from all the screens.

The Gorge …allows you to look at the natural beauty our home has to share and give us so effortlessly. Working with the Audubon Society allows me to put myself in spaces such as our Gorge, clear my conscience, and appreciate life through another perspective.