Back to Newsroom
An autumn view south from Memaloose hills. (photographer: Meagan Currier)

Sometimes, as I go about my days, weeks, months, and years, if I don’t lift my head, I miss the subtle changes going on around me. A great example came as I reviewed Friends’ 2022 Gorge Opinion Survey that we recently conducted with members and the general public. Friends of the Columbia Gorge has conducted surveys and polls for decades, asking a variety of questions over the years, but every survey we’ve done in the past quarter century has asked whether people support the federal protections of the Columbia River Gorge National Scenic Area Act.

When I joined Friends in 1998, the National Scenic Area was just 12 years old, and Gorge protection was still not a given. Citizen groups were still working to undo the National Scenic Area designation, and the new framework of rules and regulations was going through active growing pains. At my first public hearing, our conservation director and I were referred to as “criminals who have not yet been brought to justice.” Fewer than half of Gorge residents supported the Scenic Area then, and while support was stronger in the Portland area, that support was highly partisan. That’s when Friends began working to shed its Portland-centric reputation. 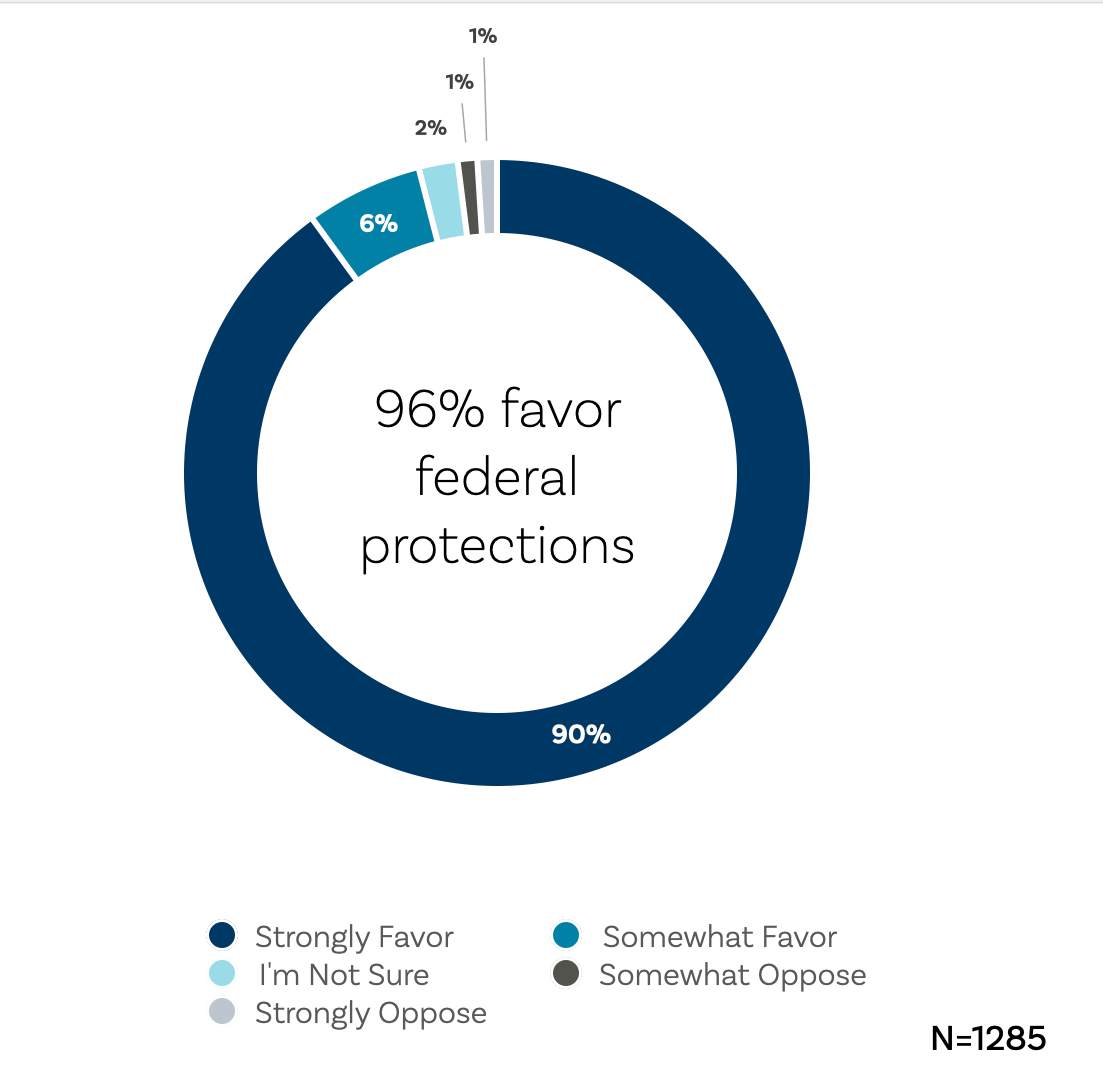 We opened our first Gorge field office in 2000, and a few years later, another survey showed that just over half of Gorge residents now supported the National Scenic Area, a positive trend that coincided with large development proposals threatening the Gorge, which most Gorge residents opposed. Little by little, the Scenic Area legislation was being viewed as a shield not only to protect the Gorge, but also to protect Gorge communities, and we kept doing our work.

With so much media today focused on conflict and disagreement, positive indicators can seem hard to find. Seeing firsthand the steady growth of support for Gorge protection gives me hope that maybe our divided world is not so divided after all.

While much of the information in the survey was designed to help Friends staff and board in their work here at Friends, I asked our communications director (2017-22) Burt Edwards to share some highlights and reflection from his team's work on the recent survey.

Friends has conducted various opinion surveys (as many conservation organizations do) over the decades (including regular surveys of members) and most recently participated in an effort led by the Coalition of Oregon Land Trusts to gain a picture on public opinion on land conservation across the state of Oregon and SW Washington. 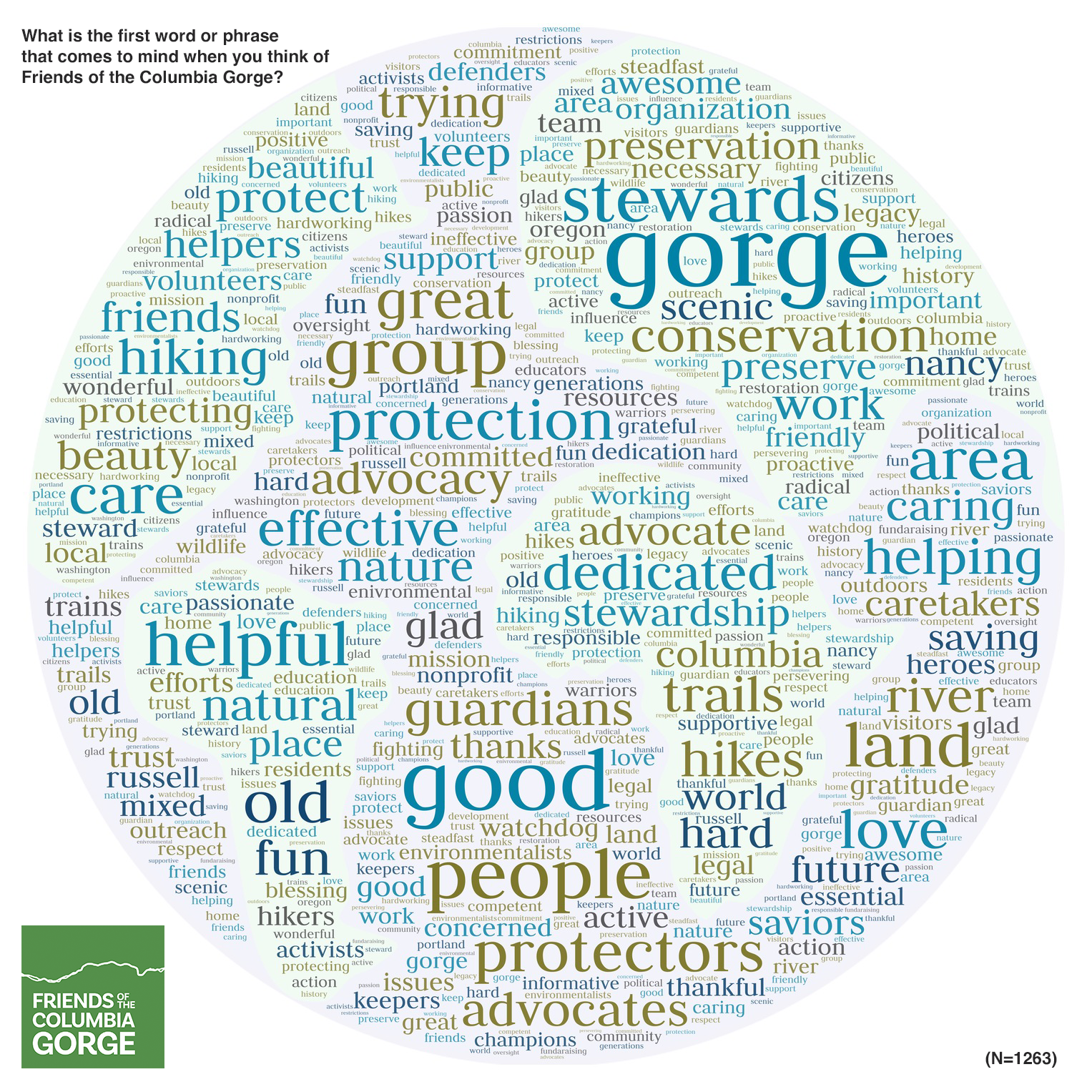 This past March, Friends conducted a new online survey to gauge current public priorities and the public’s views on conservation opportunities and challenges facing the Gorge. Our goal was to capture a combined picture from both the general public and from our members, volunteers, and activists. Just under 1,300 respondents completed the survey, with the majority (95 percent) from Oregon and Washington and roughly 20 percent of those either residing in the Scenic Area or visiting the Gorge daily.

Respondents included members of the general public as well as current/former members, activists, volunteers, partners and others who have participated in a Friends event or subscribe to one of Friends' mailing lists.

Who worked on the survey?

The survey was developed by Friends Public Engagement team (Kassy Delgado, Burt Edwards, Melissa Gonzalez, and Stan Hall), with input from staff on questions and categories.

The data was compiled by staff and analyzed by an external consultant (Ashley Moore) with supervision by myself, as Friends' communications director (2017-22) and ultimately overseen by Kevin, as executive director. But I managed the overall project for Friends.

What are some of the highlights found? 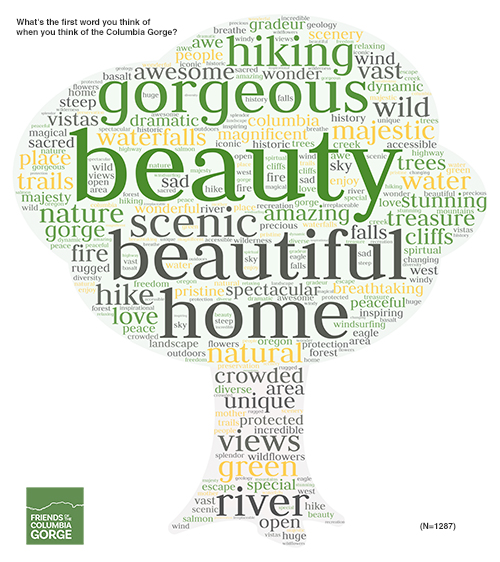 The top three words used to describe the Gorge were: “Beauty/Beautiful,” “Gorgeous,” and “Home.” There also was strong agreement on the biggest challenges facing the Gorge, with “Development,” “Climate Change,” and “Overuse” receiving the most mentions, by far.

We also asked respondents the first word that comes to mind when they think about Friends of the Columbia Gorge. “Protectors/Protection,” “Gorge,” and “Conservation” topped the list. In follow-up questions about our work, a strong majority agreed that Friends has a clear mission (84 percent) and that our work centers values reflecting their own (87 percent).

What about the popularity for Scenic Area Protections?

As Kevin mentioned, the item that saw the strongest support was the federal protection provided by the Columbia River Gorge National Scenic Area Act. An overwhelming 96 percent of respondents favor (90 percent strongly, 6 percent somewhat) “federal protections from development that would harm the Gorge’s natural scenic beauty and recreation opportunities.”

At a time when Americans seem divided on a host of major policy issues, it’s inspiring to see a wide and deep base of support for the protections the Scenic Area enjoys today—a testament to the decades of hard work invested by Friends’ staff, board, members, and community partners.

There are a number of serious challenges facing the Gorge in the years ahead but the solid base of support for scenic area protections will be an invaluable foundation for Friends and its partners in pushing efforts to protect, preserve, and steward the Gorge ahead.

The above graphics reflect public responses regarding the Gorge itself (tree-shaped graphic), and Friends of the Columbia Gorge (globe-shaped graphic). (Analysis and graphics: Ashley Moore)