Gabe Sheoships (right) and Sacas Wildbill at a fishing platform on the Columbia River. (photo courtesy of Gabe Sheoships)

The Columbia Gorge is renowned for its diverse natural ecosystems and habitats, from its temperate rainforests to dry grasslands. It also served as a mixing bowl and place for a diverse collection of communities to gather and celebrate the wonders of nature for generations—a role it continues to serve for many today, my family included. 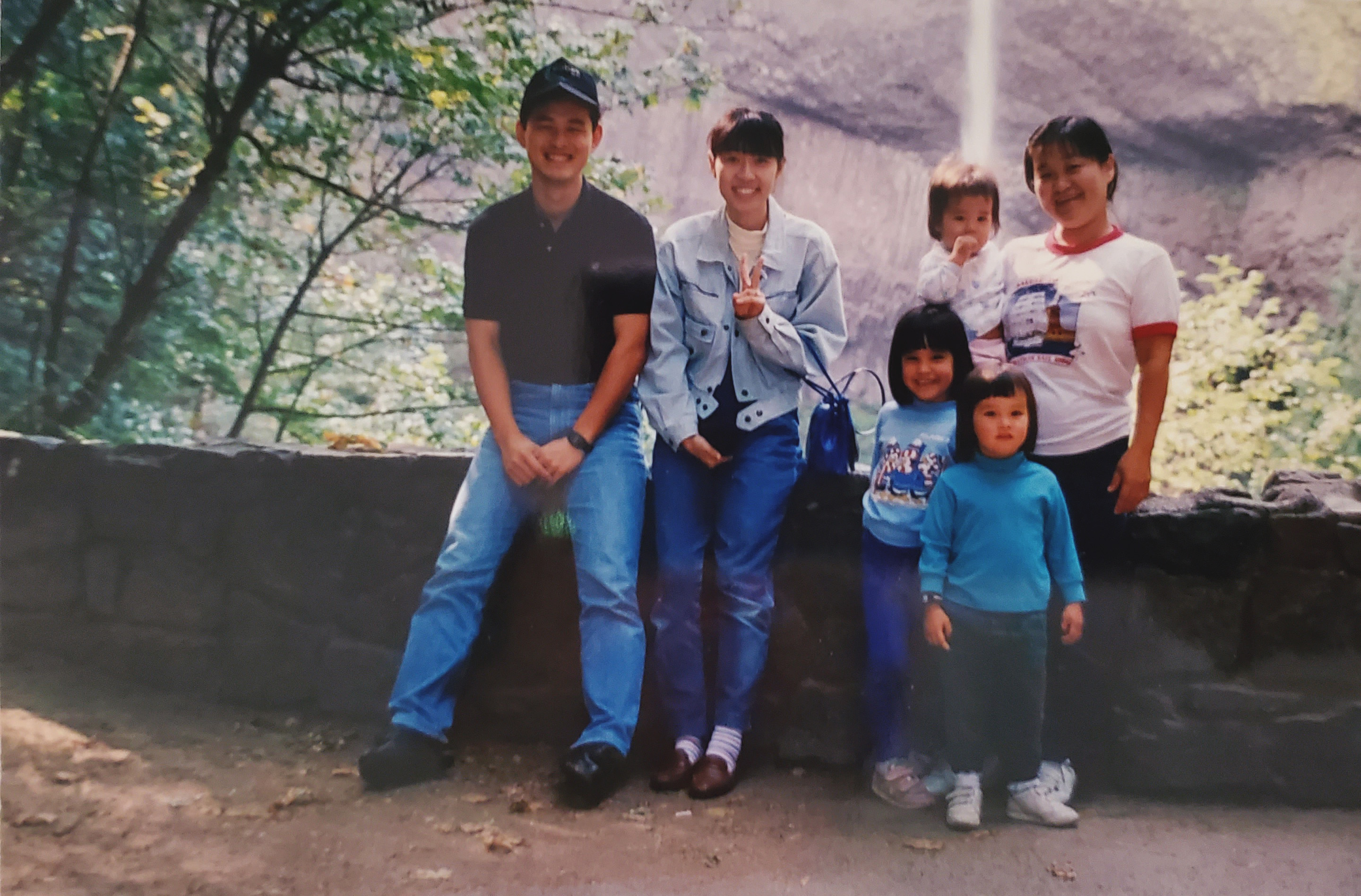 My relationship with the Gorge dates back to when I was a toddler. I remember being amazed by how the switchbacks leading up to Multnomah Falls felt like they were never-ending and was grateful that my father later carried me up the trail. The Gorge was the place we’d bring visiting relatives, picnicking together at the parks and seeing the iconic waterfalls. And it continues to inspire connections with stewardship volunteers I work with in the Gorge now.

At a time when there are so many forces pulling our society apart, I wanted to revisit how a place like the Columbia Gorge can still bring people together, even if virtually. To help me tell this story, I spoke with several fellow conservation professionals—Gabe Sheoships, Adriana Escobedo-Land, and Ann Harris—with whom I've had the honor to work during my time at Friends. No one family, background, or perspective can completely capture the Gorge in its entirety, but taken together their collection of experiences reveal the Gorge’s ability to connect, even during a year of great disconnection.

Gabe Sheoships is an enrolled Cayuse/Walla Walla tribal citizen of the Confederated Tribes of the Umatilla Indian Reservation, tribes with a rich history and contemporary presence in the Willamette Valley. "The Columbia Gorge and the Big River, N’chi-Wana, are a very important place for so many reasons and serve as a corridor of gathering,” Gabe noted. An Indigenous ecologist, educator, and fisheries biologist, Gabe has worked for almost 20 years to challenge students to understand ideas of reciprocity, stewardship, and education in a holistic sense.

Celilo Falls, an iconic tribal fishing area on the Columbia River that was submerged by the construction of The Dalles Dam in 1957, was a place where Gabe’s grandparents would go to fish and gather. Celilo Falls served as a regional convening and trading place for many tribes and was recognized as one of the greatest fishing sites in North America. Gabe's mother was pretty young at the time, but she remembers being there with family.

To this day, many Indigenous families live on the Columbia River, year round, and fish in traditional ways. They depend on the river for their livelihood, and when the fish are not returning it speaks to a larger problem. But for the last 100-plus years dams, overfishing, and pollution in the Gorge have all taken a toll on wild fish populations. “The health of our fish is an indicator of our relationship with the environment.” Gabe stressed.

For many, the Columbia Gorge is much more than a recreation destination. It also encompasses rich cultures, entices gatherings, and fosters community. For Gabe, passing through the Gorge, fishing, and meeting with family has been central in his life. “Our lives as Indigenous people intertwine with the rivers, converging and gathering, just as fish seek to do. Celilo was a very important place and it still is despite all of the changes that’s happened.” People, the river, and other living aspects make up the Gorge for what it is, Gabe noted. The Gorge reminds us that we are part of nature, not apart from it. 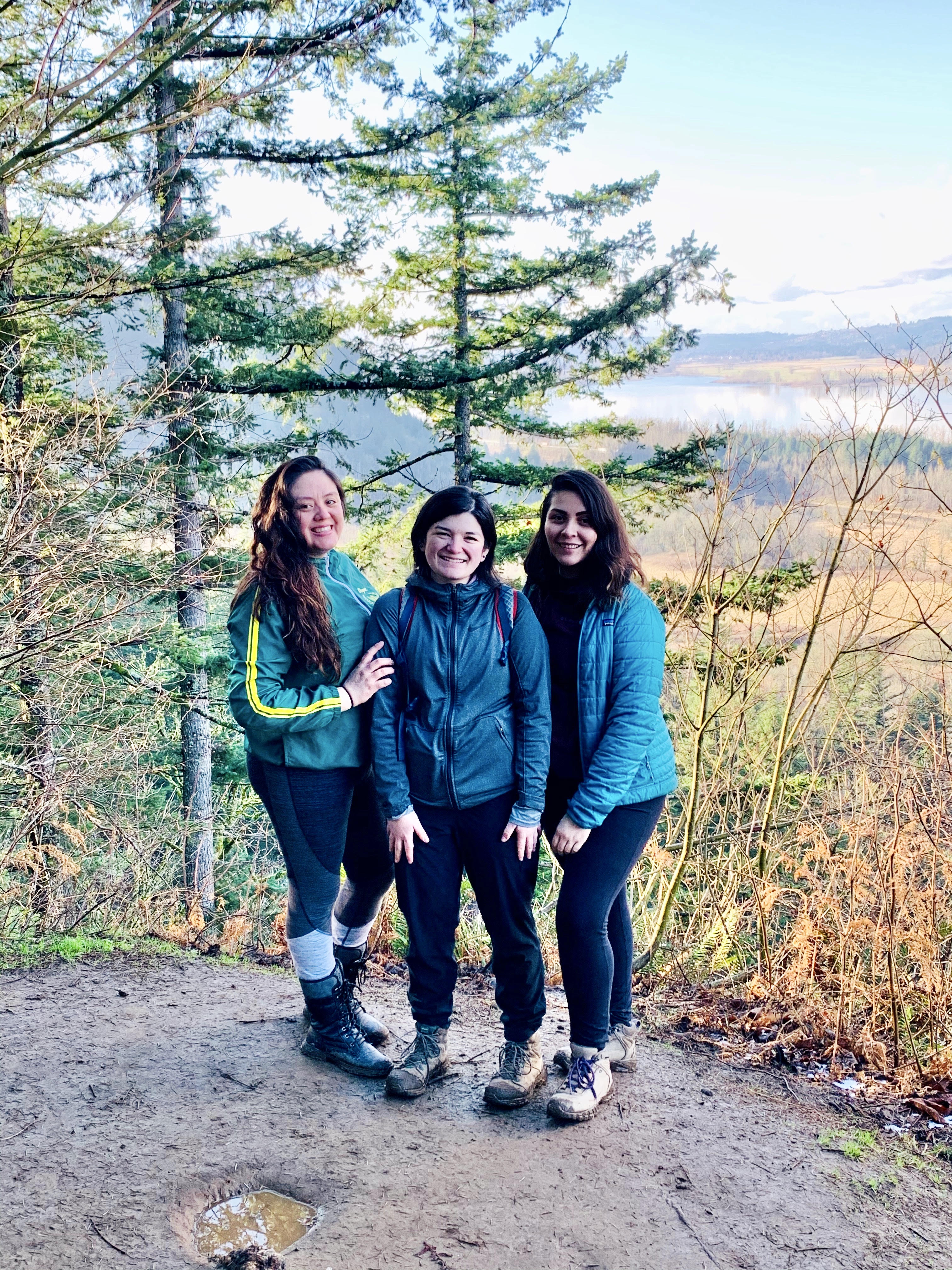 “The Gorge is a place to think, to be in nature, and connect with others,” Adriana Escobedo-Land stressed. An environmental consultant with the Samara Group, Adriana’s exposure to the Gorge came from her aunt and revealed to her the importance of connecting others with the outdoors. Adriana mentored her family members once they began exploring natural areas outside the city.

Adriana's half-siblings, whose first language at home was Spanish, helped her realize that information on where to go, what to expect, and how to prepare for Gorge outings can be complicated for first-time visitors; it helps to first learn it from someone you can trust. “For big families with kids, being able to find information about places like Rooster Rock State Park for spending time outside with young kids is important,” Adriana shared. She also learned that people have diverse expectations about Gorge recreation.

Adriana remembers hiking once with her sister, who wanted to jam to music while on the trail. That wasn’t something Adriana typically does, and she found it brought new fun to the experience. “It’s important to recognize where everyone is coming from.” Assumptions about trail etiquette shape opinions about who’s on the trail and how others should behave, but those values aren’t universal. By re-evaluating expectations, you can have a great time in the Gorge and others can too, Adriana noted. “It’s so important for people to connect with the outdoors, so if someone is enjoying their music, then I love to see it.”

Representation and inspiration in nature, generation to generation 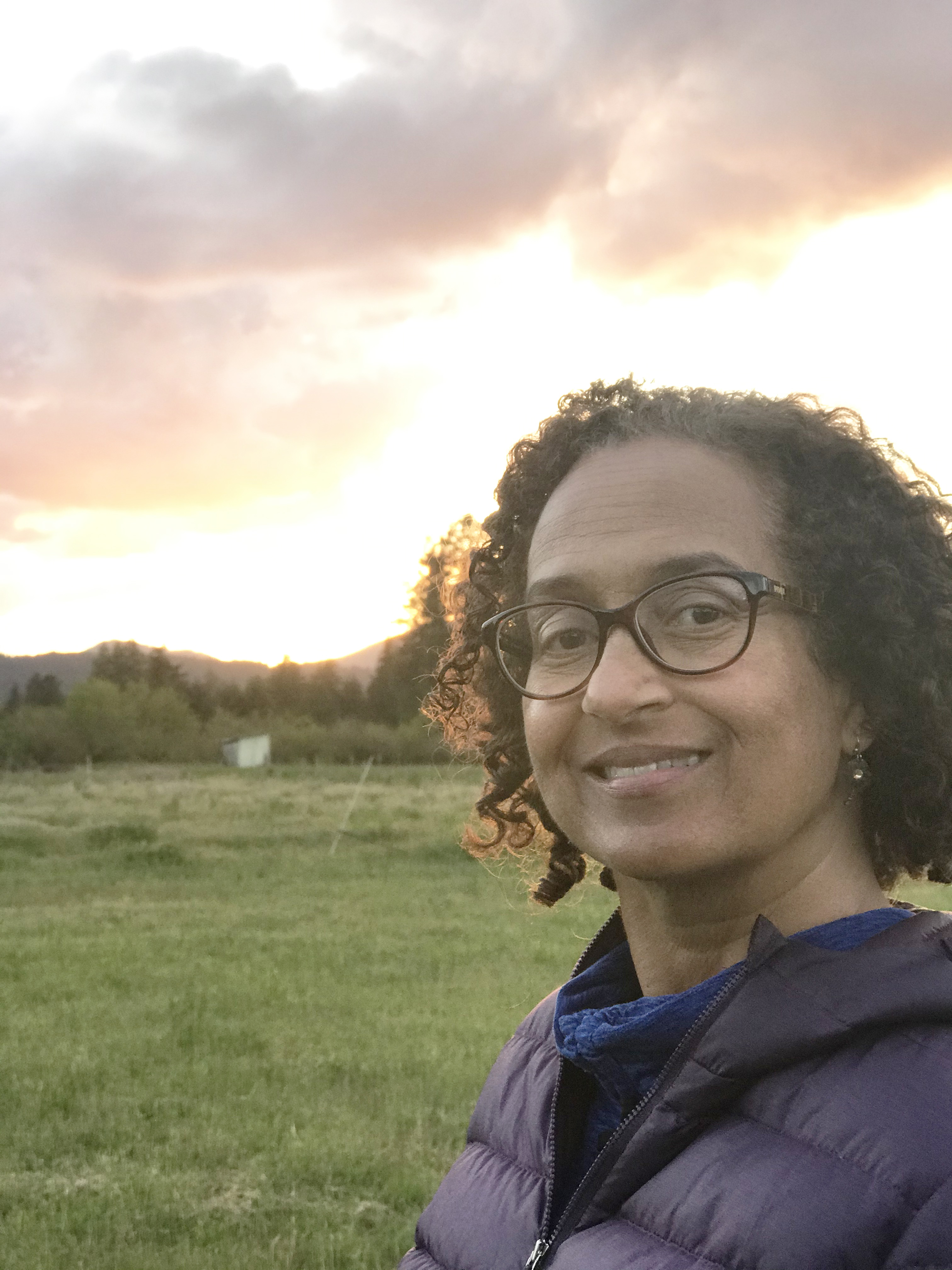 Ann grew up listening to her father’s stories about his camping trips. “I tried to think about how my parents became so open to going camping when this was not a thing that most Black people did then—and isn’t now,” she recently noted.

Later, Ann learned that her father had been a counselor at Camp Atwater, the oldest African-American residential camp in the United States. He cultivated a love for nature and passed it on to his family. “It’s really important to have leaders and role models,” Ann said, “for people of color to see the possibilities for more participation in outdoor recreation, education, and career opportunities.”

In high school and college Ann followed in her father's footsteps, working as summer intern for a program that provides inner-city kids with outdoor recreation opportunities and exposure to careers in conservation. While these new experiences encouraged the children to expand their comfort zones, the participants embraced vulnerability through the support of leaders they could identify with and trust. 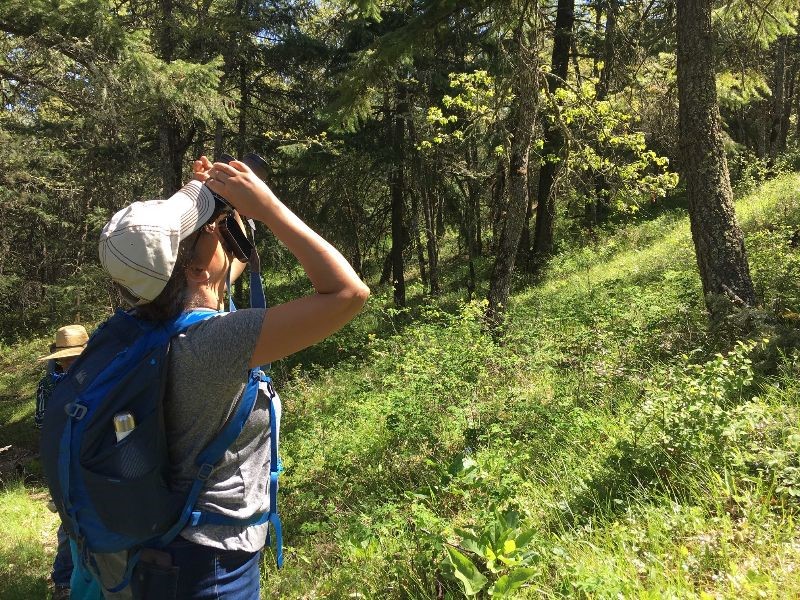 “We need to create a pipeline for young people to engage with the Gorge and discover careers within the conservation and outdoor recreation to create future leaders, board members, and advocates,” Ann stressed.

Ann handed down her father’s experiences and emphasized spending time outside while raising her children in the Gorge. “I always encouraged them to look around, to sit and to observe, and they have both continued that love of nature.” Ann shared. “For me, one of the greatest parts of the Gorge has been raising my kids here and their immersion in such a beautiful place that is now part of their heart.”

The Columbia Gorge was a place that I had a one-sided relationship with for far too long, taking memories and experiences without giving back.

I was in preschool when my father taught my sisters and me how to skip rocks near Multnomah Falls, and I remember the taste of the vanilla ice cream cone that brought bliss to the hot summer day. In my early twenties, a typical weekend consisted of visits to the Gorge to escape stress associated with working as a corporate consultant. Every Sunday, my pup and I would go to find solace among the western Gorge’s conifer forests before spending the rest of the day slogging through countless work emails. 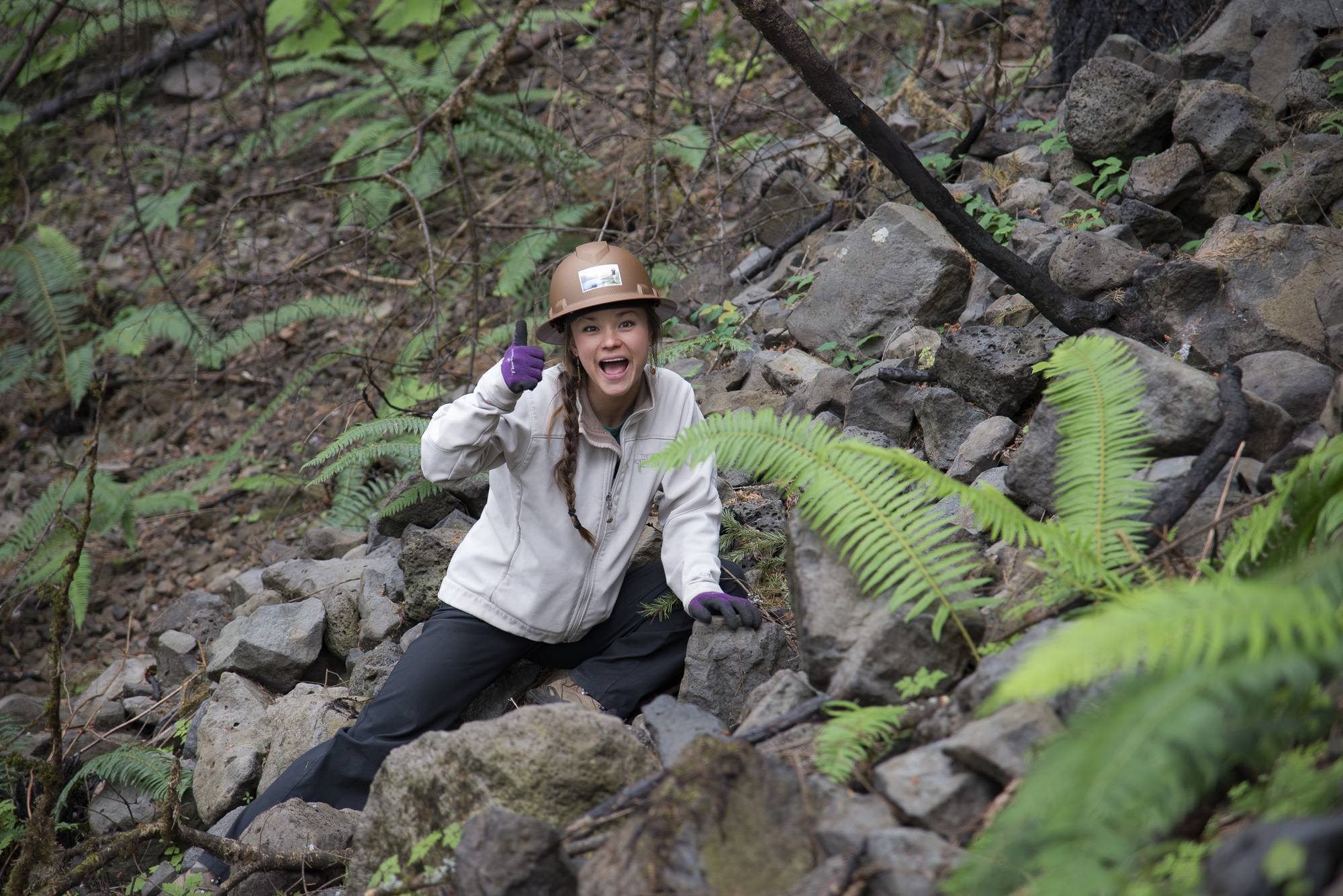 When the 2017 Eagle Creek fire occurred, I was one of the thousands of people who contacted Friends of the Columbia Gorge inquiring about ways to help. I later joined as their new stewardship volunteer coordinator.

Over the past several years, I've worked with hundreds of volunteers on stewardship projects across the Gorge. I love getting my hands in the dirt, and leading ecological restoration events in the Gorge has been an amazing way to give back to a place that's meant so much to me and my family. Yet one of the most rewarding parts of my work has been seeing other families turning out to help steward lands in the Gorge, together. Their backgrounds and personal ties to the Gorge have varied, but they have been united in their commitment to help steward the Gorge to ensure that future generations can also enjoy its many wonders.

The Gorge is a stronger place when we all can work together to protect it and when we all honor the diversity of experiences and backgrounds of the many people who live, work, and seek inspiration there. When I hear stories with common threads of community, connection and nature such as those Ann, Adriana, and Gabe shared with me about what the Gorge has and continues to mean to their respective families, I smile. And when I see families working together to steward and give back to the Gorge, I have hope.