Back to Newsroom
A young western pond turtle almost appears to smile as it is about to be released into its natural habitat at the Turtle Haven preserve. (photographer: Vince Ready, Lasting Light Photography) 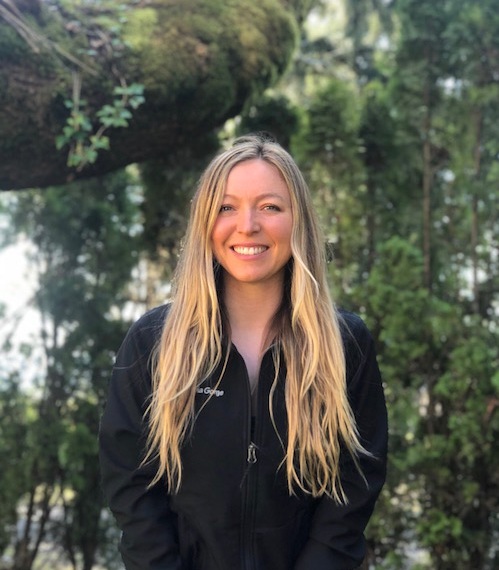 Around this time last year I was sitting at my desk at Oregon Public Broadcasting (OPB), where I worked as a production assistant for the radio talk show Think Out Loud, when a colleague asked if anyone was interested in covering a story about a small group of endangered, zoo-raised turtles being released back into the wild. Without hesitation, I said “Yes!”

I didn’t know it then but that simple yes would change my life.

The story concerned a local conservation group, Friends of the Columbia Gorge, and their successful partnership with the Oregon Zoo, Washington Department of Fish and Wildlife, and other agencies that joined together to save the last one of two native freshwater turtle species left on the West Coast, the western pond turtle.

From a radio station to a natural haven 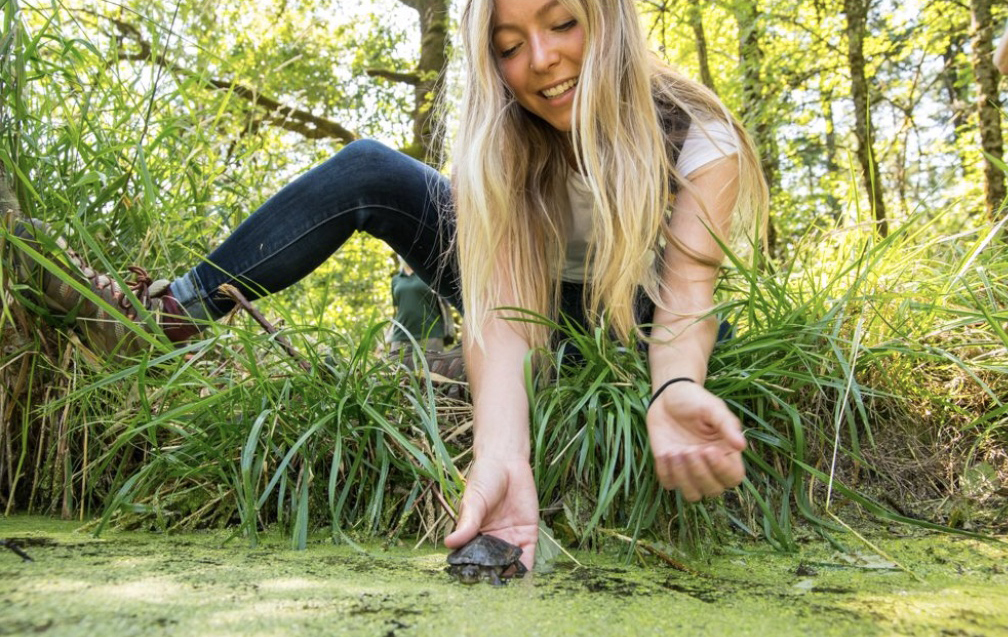 A year later, picture this: I am no longer at OPB, but instead working for Friends and actually participating in our latest turtle release, an exciting turn of events coming from someone who could only live vicariously through those involved in the 2019 event. And instead of covering the event remotely from a home office, I am at Friends of the Columbia Gorge Land Trust’s 65-acre Turtle Haven preserve on the Washington side of the Gorge, one of only six places in Washington state with a known population of western pond turtle, a species that's endangered in the state. The land trust team, led by Stewardship Coordinator Sara Woods, custom-designed this year's event to promote a covid-safe release.

Turtle Haven consists of thick forest land and two large ponds that have just the right amount of shade and sun for basking, the perfect habitat for a freshwater turtle. The ponds look unspoiled, with tiny green, flower-like lily pads painted across the surface and long logs lying across, perfect for sun-basking turtles. I can sense the landscape’s sensitivity and at the same time, its resiliency.

I am one of ten people standing in a circle in the shade of a tall, willow-like tree, masked and physically distanced due to the current pandemic. In the circle is a white cooler holding 23 western pond turtles that hatched nine months ago after being collected from the wild and have been steadily growing in the Oregon Zoo’s conservation lab. Staring at that plastic cooler full of storage containers with slow-crawling baby turtles feels strange; I can’t help but think how unfortunate it is that it has to come to such extensive measures to save a species, while also feeling grateful something was being done before it was too late.

Threats to a timeless species

What many forget is when we lose a species, we lose much more than their physical presence. An entire ecosystem is interrupted. Turtles act as filters for our rivers and streams as they feed off of dead material and serve as food for others higher up in the food chain. For some Indigenous people, in North America and around the world, turtles hold symbolic significance in creation and cultural beliefs.

Turtles have survived on this planet for millions of years; some species have co-existed with both humans and dinosaurs. Although slow of foot, turtles’ ability to adapt and survive is incredible. However, in the Gorge and elsewhere invasive species such as the bullfrog disrupt the life cycle of native species like the western pond turtle. Even though they’ve survived natural cataclysms such as the Ice Age floods, the turtles can’t compete with something that reproduces 21,000 eggs at a time, like bullfrogs do. A series of other factors have impacted western pond populations, including habitat loss from development.

While sitting alongside the largest pond at Turtle Haven, I feel the warmth of the sun’s rays shining through the forest canopy and absorb the sound of a nearby stream as long as I can. Like many, I feel my calmest and most whole self when in the outdoors. Being raised in a farming family, I was fortunate enough to play in the same fields of strawberries and wheat that my mother played in as a child and that my grandmother planted as a young woman. Being connected to land, forming a relationship with it throughout my life, gave me a deep respect for it and the many inhabitants with whom I share it, because I understand what would be lost if it no longer existed. Turtle Haven is one of those places that I can’t imagine being changed or developed because of how much it provides for so many species.

Personally taking part in the turtle release, I see firsthand how much life Turtle Haven hosts and how crucial this habitat is for its survival. Holding the small turtles, maybe the size of a sand dollar, I can’t help but want to stare at them longer before sending them off in the pond. They’re such small but strong critters, outlined with thick armor that crinkles like an alligator’s skin.

Now, I look the last one in the eye, wishing it the fullest life. Slowly, I put my hand in the water to let the turtle slip into the pond it will call home for its expected 50- to 60-year life span. As the little one swims away, I feel an immense wave of joy and gratitude, knowing the turtles’ home would be protected and preserved for their lifetime and for generations after.