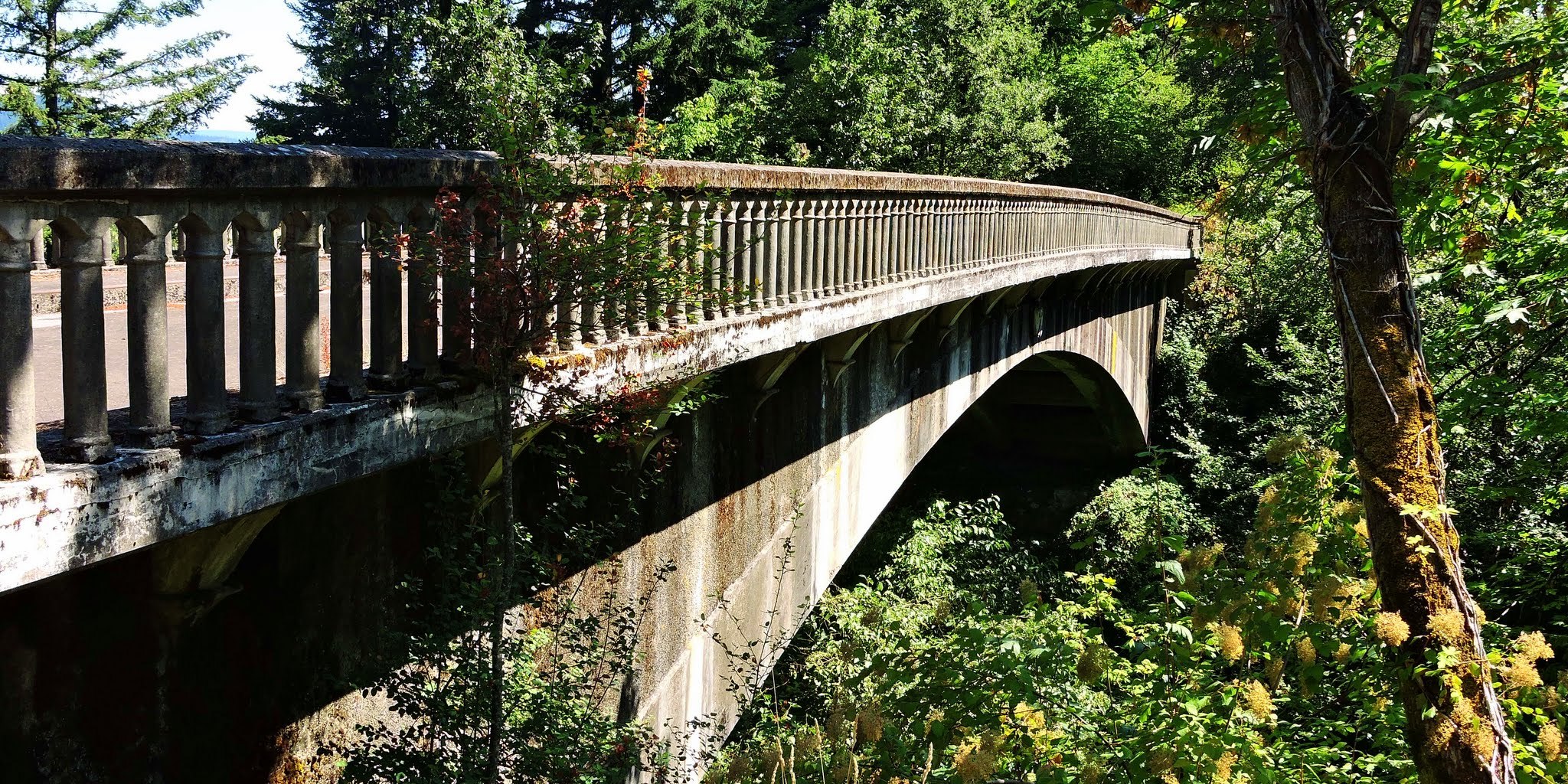 This trail was impacted by the 2017 Eagle Creek fire. We encourage hikers to be extra alert when hiking in burned areas in the Gorge. Falling trees, landslides, and debris flows are more likely in the burned areas because of unstable soil due to less vegetation to hold it in place.

Learn more about the initiative to create a 200-mile loop trail network in the Gorge.

This 7-mile section of the paved Historic Columbia River Highway State Trail has it all: side hikes, waterfalls, nonstop views, a visit to Bonneville Dam, and great places to watch spawning salmon (in season). The turnaround (or halfway) point is Cascade Locks, where you can find brewpubs, ride across the Bridge of the Gods, buy fish caught by Native Americans, and grab some snacks for the ride back.

The round trip is 14 miles, with the trail gaining and losing 100 feet of elevation several times for a total gain and loss of about 500 feet. Near Eagle Creek, two levels of the State Trail are stitched together by a staircase. Roll your bike up a gutter or carry it. Bring a bike lock if you want to hike along the way or eat in Cascade Locks, and money if you want to pay the toll to cross the Bridge of the Gods. There is one snack stop and restroom break along the way, at Bonneville Lock and Dam.

The Historic Columbia River Highway State Trail is managed by Oregon State Parks. No passes are required. Dogs must be on a leash no longer than 6 feet.

Points to stop at, in the order encountered, are:

The original 365-foot McCord Creek Bridge was built in 1915 and was more utilitarian in design, lacking the beautiful arches and design elements of other Historic Columbia River Highway bridges that Samuel Lancaster and Karl Billner designed. This bridge has been replaced a couple of times, and the one standing today over McCord Creek was built in 2012 with a vintage Art Deco design. After the ride, you can explore McCord Creek’s waterfalls with the Elowah Falls and Upper McCord Creek Falls hikes.

Built in 1915, and abandoned in 1950 when the newer highway bridge was built, this bridge was rescued from the blackberries in 2000 when it became part of the State Trail. It’s 205 feet long, with an arched, 170-foot span; the arch, barely visible to the casual observer, rises 1 foot for every 10 feet in length. The bridge is designed to pivot with expansion and contraction on three massive cast iron hinges, one at each abutment and one in the center. At the time of its construction in 1915, Moffett Creek Bridge was the longest three-hinged concrete flat arch bridge in the U.S.

The 0.9-mile, one-way walk to beautiful Wahclella makes for a nice break. Afterward, pedal under I-84 to visit Herman the Sturgeon. He and rainbow trout swim in rocky pools at Bonneville Lock and Dam, a National Historic Landmark. The fish-rearing ponds are part of the dam’s beautifully landscaped grounds. Restrooms are here, along with snacks and coffee in the gift shop.

The State Trail here was built in 1996; the original Columbia River Highway in this section was destroyed in 1937 when it was realigned and the Tooth Rock Tunnel built. The tunnel is still in use, for eastbound lanes of I-84. The State Trail passes above it. Views are superb. Watch for the stop sign on the trail. Beyond it the trail abruptly stops at a staircase.

This stairway dates from 1996 and replaces a section of the old highway destroyed in 1937 during construction of the Tooth Rock Tunnel.

The bridge over Ruckel Creek is from the original highway. It dates from 1915. After it was abandoned in 1937, when the highway was rebuilt in this area, its arches partially collapsed. In 1999, the bridge was restored and brought back into use as part of the State Trail. The 46-foot falls downstream of the bridge is easy to see but easy to miss, too. Look over the short but stout bridge railing.

Bridge of the Gods and Cascade Locks Trailhead

Other Hikes from This Trailhead

Eastbound I-84: Take exit 35/Ainsworth. Turn left at the stop sign, then immediately right onto Frontage Road. Drive east on Frontage Road 2.1 miles and turn right into the John B. Yeon trailhead and parking area, just before the road re-enters eastbound I-84.

Westbound I-84: Take exit 37/Warrendale and head west on Warrendale Road 0.25 mile to a stop sign. Turn left, drive under the freeway, and turn left onto Frontage Road. Drive 0.25 mile east to the John B. Yeon trailhead and parking area. It is on the right side of the road, just before the road re-enters eastbound I-84.