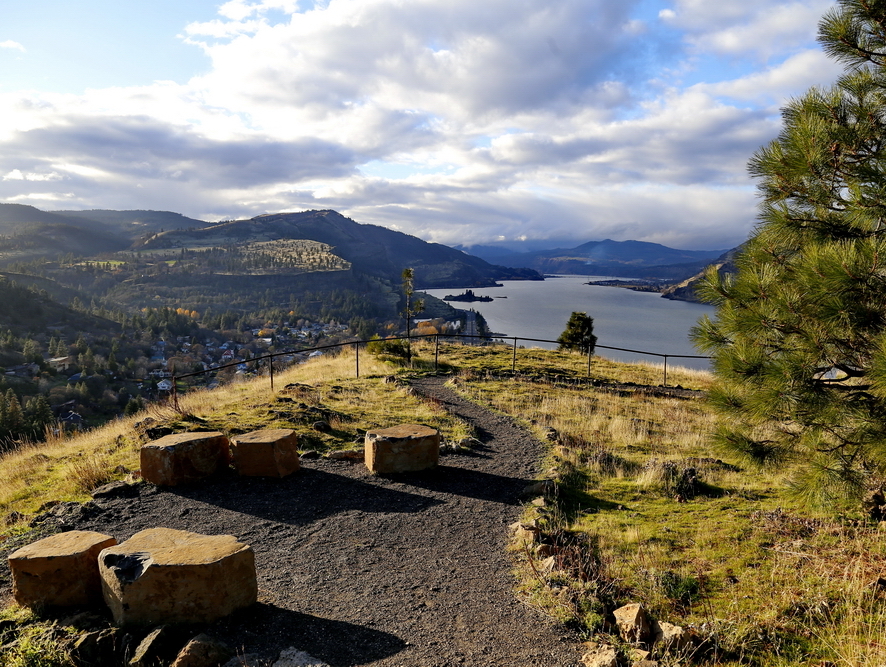 Mosier Plateau is a 45-acre, cliff-top preserve located on the Oregon side of the Columbia Gorge with a 3.5-mile trail connecting to the community of Mosier. This stunning natural place is home to a diverse array of wildflowers and a spectacular view of the surrounding area.

Mosier Plateau is famous for its uniquely diverse community of wildflowers with over 50 different species represented. With peak wildflower season being mid-to-late April, visitors are greeted by sloping meadows bursting with color. Common native species like arrow leaf balsamroot, prairie star, paintbrush, blanket flower, and lupine are abundant, but Mosier Plateau is also home to the rare and sensitive species white fairypoppy (Meconella oregana). The plateau’s rocky cliffs are not just an outstanding view. The delicate white fairypoppy and other sensitive species need crumbling disturbed rocky cliff faces to grow.

Prominent oak woodlands inhabit the remainder of the 45-acre preserve. These secluded groves are occupied by Oregon white oak, ponderosa pine, Douglas fir, snowberry, elderberry, chokecherry, and (enjoyed by animals, but not so popular among humans) poison oak. The oak woodlands and abundant understory provide forage and hiding spots for wildlife such as deer, squirrels, and even the elusive cougar. 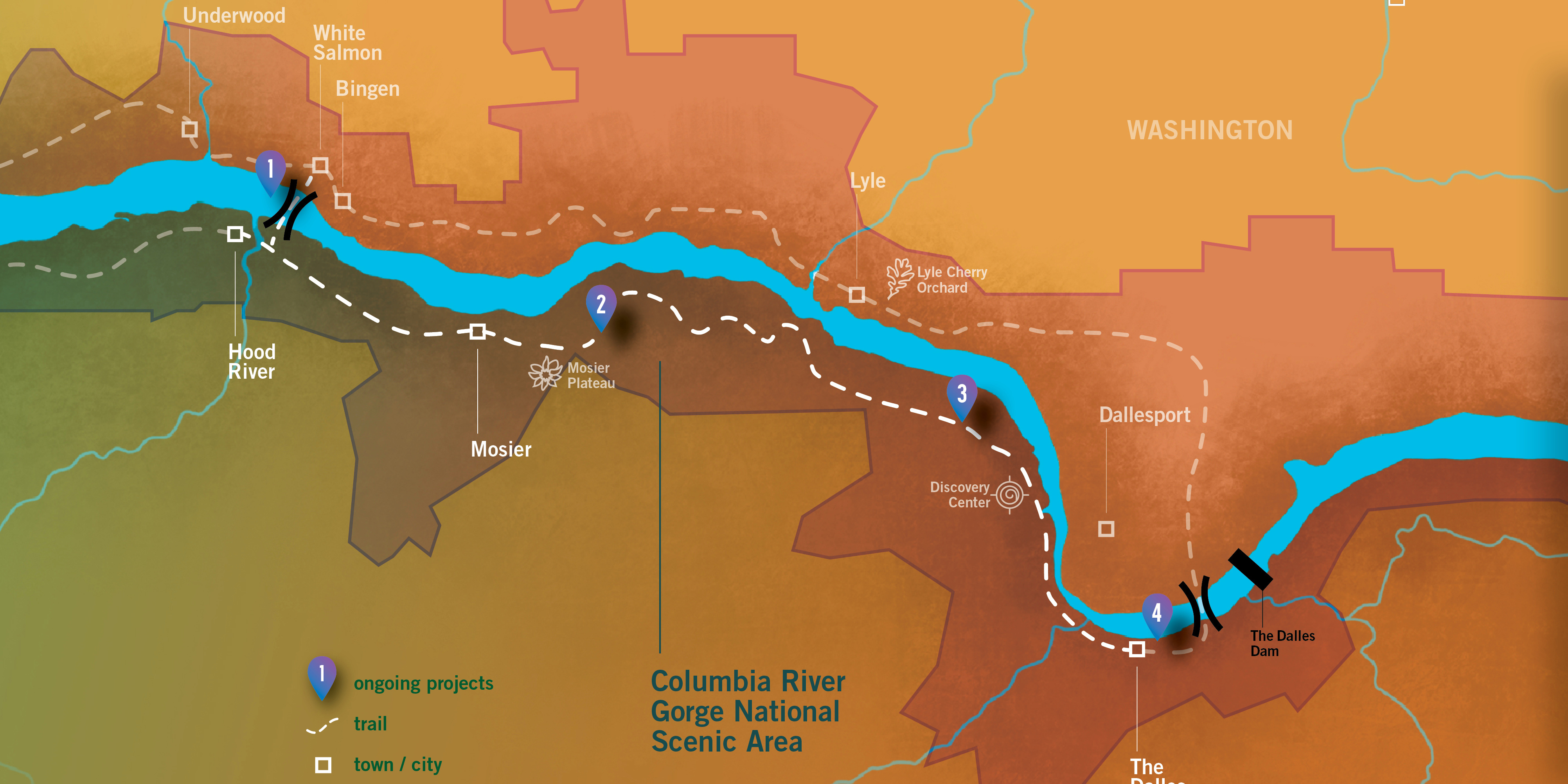 Mosier Plateau’s trailhead is located in the heart of the charming town of Mosier, Oregon. The trail passes through the historic town cemetery and the Mosier Creek Falls swimming hole, continuing onto our 45-acre preserve.

Since this preserve was opened to the public in 2013, the plateau has provided the community of Mosier with a natural space right in their back yard. Mosier Plateau has become a prominent feature of the town and has attracted visitors from all over the Columbia River Gorge and beyond to explore the land and boost the local economy. 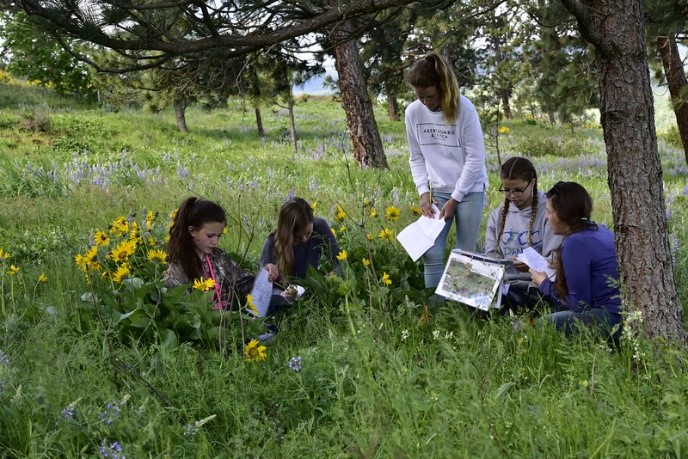 In recent years, our land trust staff has taken students from the Mosier Charter School to Mosier Plateau in partnership with the Gorge Ecology Outdoors (GEO). The preserve has been used as a classroom for school children to learn about local ecology and natural history through seed planting, plant identification, and junior naturalist training.

The land trust has worked collaboratively with the City of Mosier during the time it has owned the Mosier Plateau preserve. The Mosier Plateau trail is managed cooperatively by the city and the land trust, with the first half-mile of the trail running through Mosier Pocket Park and a recreation easement from a local landowner connecting to the city park to the preserve.

During the 2020 COVID-19 pandemic, Friends coordinated with Mosier's decision to close public parks for safety reasons by closing the Mosier Plateau trail on the same timeline.

The land that is now Mosier Plateau was once used as grazing land for cattle and unofficially used for recreation by Mosier locals. One longtime local and Friends' former Land Trust Manager Kate McBride remembers climbing this hill to see the spring wildflowers with her grandfather.

"This is where I hiked when I was growing up," she said. “I knew this area like the back of my hand."

The plateau with its fantastic view had the potential to become a large, and probably expensive, suburban neighborhood. Nancy Russell, Friends' founder, purchased the land in 2005 after noticing it was in a key viewing area of Coyote Wall and other hikes on the Washington side of the Gorge. She sold the homes to a low-income housing provider and donated the land to the Friends of the Columbia Gorge Land Trust in 2007. In 2008, the land trust expanded the preserve to its current 45 acres by purchasing adjacent parcels of land. 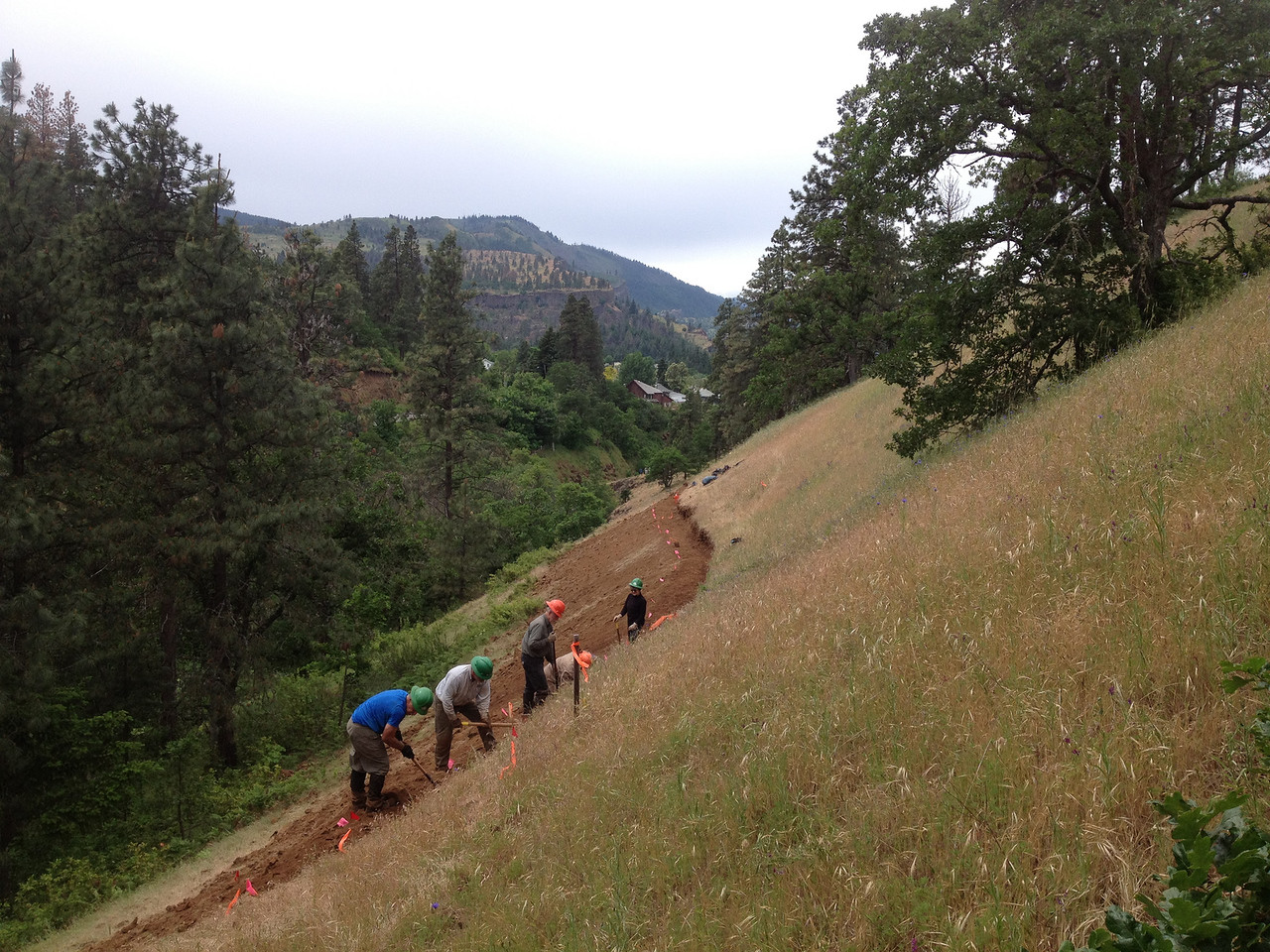 In 2013, after years of planning and tireless stewardship work, the preserve was ready to be opened to the public. The houses and outbuildings had been removed with nothing remaining but the concrete foundations. Young volunteers with the Northwest Youth Corps helped build a beautiful trail for generations of Gorge residents. Today, Mosier Plateau is recognized by The Oregonian and other media outlets as one of the best spots in Oregon for viewing wildflowers.

Ever since acquiring Mosier Plateau, the land trust has worked diligently to create a more natural space and achieve our stewardship goals. After the removal of the houses and other human-made features on the property, invasive weeds became the main focus of stewardship efforts. 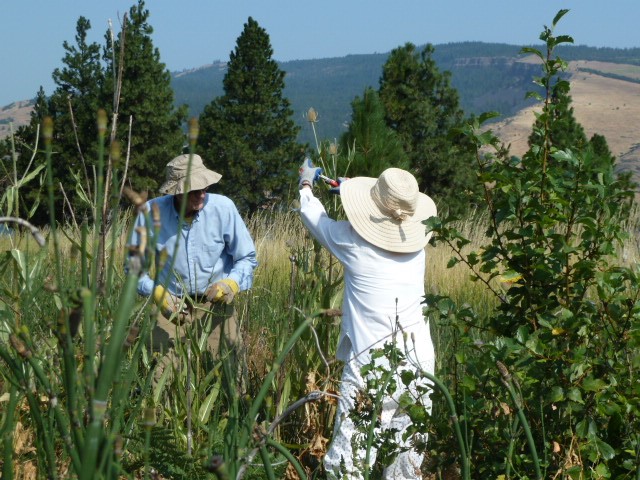 Since the donation of the property in 2007, stewardship work parties have been dedicated to the removal of the invasive weeds such as: common teasel, skeleton weed, and knapweed. A seasonally wet meadow at the preserve was once over run by common teasel. Now that the weed has been nearly eradicated, the native and culturally important common camas has been planted in its place.

The open oak woodlands of Mosier Plateau are perfect habitat for the bluebirds. Friends’ members and eagle scouts have been working to increase the local bluebird populations by building and installing bluebird boxes. Bluebird populations have declined due to habitat loss and the introduction of house sparrows and European starlings.

With the changing climate, Friends is dedicated to decreasing the risk of fire spread and fire intensity in wildland-urban interfaces such as Mosier Plateau. To reduce the risk of a fire moving from Mosier Plateau to the town of Mosier our stewardship team has cut lower tree limbs and removed excess fuel loads from the preserve. Local fire personnel from Mosier Fire Department have been very engaged with Friends and utilize the road on Mosier Plateau as a fire lookout and use the radio towers as communications.

In 2015, the Nature Conservancy completed an assessment designed to identify areas that were crucial to conservation in the face of climate change. This project looked across the Pacific Northwest to identify areas with a high level of “geodiversity”: landscapes with a complexity of soils, elevation, aspect, and bedrock that make them more likely to offer accommodating habitat to plants and animals that will be on the move in response to climate change.

According to that analysis, the rugged plateaus that stretch from Mosier to Seven Mile Hill indicate an “above average” rating for climate resilience. This includes areas along Memaloose Bluff, Tom McCall Point, and the Rowena Plateau. Investing in permanent land conservation and stewardship in this area will have long-term benefits to plants and wildlife in the face of climate change.